A better foundation for 3D memory 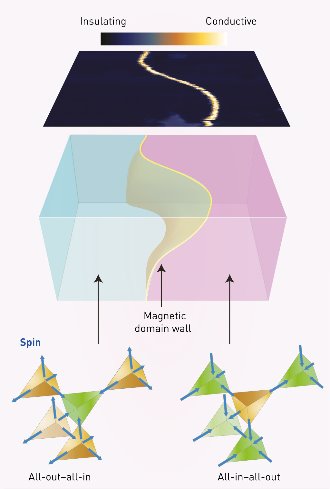 Efforts to shrink memory devices beyond the limits imposed by conventional lithography have focused on nanoscale regions, known as magnetic domain walls, which can be manipulated in three dimensions. Now, RIKEN researchers and international collaborators have detected a new type of domain wall with highly conductive, mobile metallic states that promises to make three-dimensional memory systems easier to control and miniaturize1.

Kentaro Ueda from the RIKEN Center for Emergent Matter Science and colleagues investigated neodymium iridate pyrochlore (Nd2Ir2O7), a rare-earth-based magnetic insulator with unusual properties. Spins in this material are arranged tetrahedrally and alternately point ‘all-in’ toward the center of the tetrahedron, or face ‘all-out’. Two types of magnetic domains form in Nd2Ir2O7—‘all-in–all-out’ or ‘all-out–all-in’ (Fig. 1)—and some large-scale studies have hinted at abnormal conductivity occurring at the barriers between them.

The team used a technique called microwave impedance microscopy to obtain direct nanoscale information on the domain walls of Nd2Ir2O7. Samples were cooled to close to absolute zero and their surfaces were then scanned by an ultrasharp and highly conductive probe that senses variations in electrical resistance. The resulting images revealed the presence of narrow, curvilinear features, roughly 100 nanometers wide, that were hundreds of times more conductive than surrounding regions.

“The emergence of metallic domain walls, in spite of the fully insulating bulk state, provoked a lot of discussion in our team,” says Ueda. “Where does this behavior originate? And why is this material so special?”

One potential application of this technology is magnetic random access memory (MRAM), in which data is stored by altering the electrical resistance of the recording medium. Currently, resistance changes of several tens of per cent are used in MRAM. In contrast, metallic domains can change the resistance by factors of several hundred, which should enable much more compact MRAM devices to be fabricated.