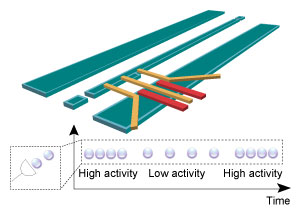 Figure 1: A theoretical study predicts that single-atom lasers (schematically depicted on the top) will emit in two regimes: one with a high activity and another with a low activity. The 'pearls' represent individual photons. Adapted with permission from Ref. 1. Copyrighted by the American Physical Society.

The light emission from single-atom lasers will exhibit two stable states with low and high emission rates, predicts a theoretical study by RIKEN researchers1. This prediction is expected to be experimentally testable and will have important consequences for controlling the output of such lasers in experiments.

At the heart of every laser is a laser medium that emits light when excited. The atoms or molecules that make up the lasing medium emit particles of light, or photons, in concert, which gives rise to intense light beams in which all the photons travel in phase―a property known as coherence.

Many commercial lasers are so compact that they can be fabricated on silicon chips. But at the extreme of miniaturization, lasers have been made in which the laser medium consists of a single artificial ‘atom’.

“Single-atom lasers are the quantum limit of normal lasers,” explains Franco Nori of the RIKEN Center for Emergent Matter Science. “Instead of a large ensemble of atoms cooperating to produce a coherent laser beam, a single-quantum system emits individual photons over time.”

This ability to emit one photon at a time makes single-atom lasers valuable for fundamental investigations of quantum effects and also for applications that exploit quantum effects, such as quantum communication systems.

Now, Nori and his colleagues Neill Lambert and Christian Flindt have explored the properties of single-atom lasers by performing detailed theoretical calculations. They investigated a single-atom laser in which the ‘atom’ is a pair of quantum dots―tiny gate-defined regions of a semiconductor containing just a few electrons.

Their calculations revealed a hitherto unsuspected property of single-atom lasers. “Our calculations predict that such devices should exhibit dynamic bistability, switching between high- and low-activity regimes,” says Lambert. The two stable lasing regimes are predicted to emit photons at low and high rates (Fig.1).

This bistability is normally hidden because light detectors average the light collected over time, but it should be measurable in experiments using current technology. The bistability is expected to manifest itself in the statistics of the electric current used to deliver energy to the laser. By modulating this electric current, it should be possible to attain unprecedented control of photon emission from such lasers.

This prediction provides a glimpse into the fascinating world of quantum effects in lasers and has important implications for new applications. The team intends to look at ways to control this bistability using quantum feedback.