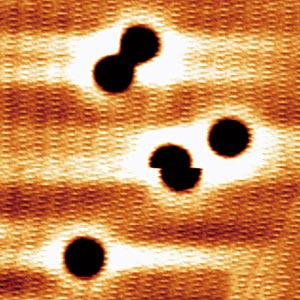 Figure 1: Topographic image showing five molecules of carbon monoxide on a silver surface. The molecule that appears sliced in half near the center of the figure is hopping to a neighboring site. Reprinted with permission from Ref. 1. Copyright 2016 by the American Physical Society.

RIKEN researchers have discovered a novel way to cause carbon monoxide (CO) molecules to move on a catalyst surface. While studying the excitation mechanisms of carbon monoxide molecules on a silver surface (Fig. 1), they found that a carbon monoxide molecule can be induced to move by exciting vibrations of the chemical bond between its carbon atom and a surface silver atom1. Since the atomic movement on the surface can be excited by electrons with energies even below those of the catalytic energy barrier, the revelation could lead to more efficient catalysis.

To study this hopping of carbon monoxide molecules, Yousoo Kim, head of the RIKEN Surface and Interface Science Laboratory, and his collaborators at other institutions in Japan and Korea used an action spectroscopy technique that employs a scanning tunneling microscope to reveal energy excitations on a molecular level. Recently developed at RIKEN, this method uses electrons from the microscope tip to excite molecules at different energies and then analyzes their induced surface motion and reactions.

“This spectroscopy technique enables us to not only assign vibrational modes, but also to discover the dynamics of the underlying reaction mechanism,” comments Kim. 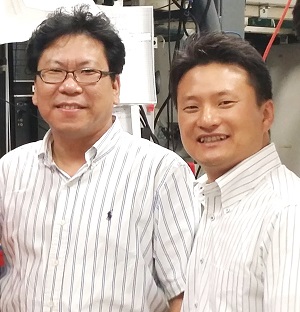 In the latter case, the hopping of carbon monoxide on the surface can be excited through overtones, in which multiple electrons contribute to induce movement. In this way, the energy an individual electron needs to induce motion is reduced. For example, for a second-order overtone, excitation occurs in two steps, each providing half the total energy needed to excite the chemical bond.

This is the first time that pure overtone excitations have been observed for this process at energies below the catalytic activation energy, and it may have profound implications for catalysis. “These results open new opportunities to utilize higher adsorbate overtone modes for triggering elementary surface chemistry processes,” says Kim. They will also stimulate further spectroscopic and theoretical investigations using this experimental approach.