A new tilt on an old particle

When recreated in a solid, fundamental particles predicted over 80 years ago could exhibit more exotic properties than anticipated 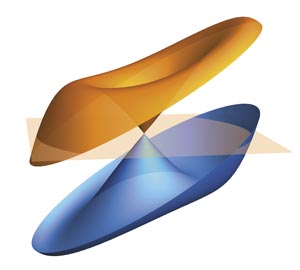 Figure 1: Schematic depiction of the energy dispersion of a tilted Weyl fermion for which the Coulomb interaction is taken into account. Reprinted with permission from Ref. 1. Copyright (2016) by the American Physical Society.

By mimicking the properties of theoretically predicted fundamental particles in crystals, scientists can explore fundamental phenomena that would otherwise lie beyond the capability of modern particle-physics experiments. Two researchers at RIKEN and the University of Tokyo now show that this analogy-based approach can even open the door to new physics not possible in elementary particle physics1.

Physicists often try to simplify our understanding of the complicated phenomena that arise when particles interact in a solid by modeling separate entities as a single entity known as a quasiparticle. The equations governing the properties of such quasiparticles are sometimes the same as those that define the behavior of fundamental particles.

The Weyl fermion is one example of this. First predicted in 1929 by German mathematician Hermann Weyl, Weyl fermions have no mass and move at the speed of light. Particle physics experiments have not yet identified any signs of fundamental Weyl fermions. However, in 2015, quasiparticles with analogous properties were observed in tantalum arsenide.

Previous theoretical work on such solid-state Weyl fermions used a single-particle approximation that assumes that electrons move independently of each other. In reality, however, electrons repel each other through the Coulomb interaction, since they have the same charge.

Now, Naoto Nagaosa of the RIKEN Center for Emergent Matter Science and Hiroki Isobe of the University of Tokyo have investigated the influence of this interaction between electrons.

“Usually, the velocity of an electron is reduced by the Coulomb interaction, since it is accompanied by the backflow of other electrons,” explains Nagaosa. “However, in the case of tilted Weyl fermions, we found that this effect is much richer and even acceleration beyond the speed of light is possible.”

The researchers discovered that the Coulomb interaction modifies the energy dispersion to an extent that it potentially could be identified experimentally.

“We will next study the variety of other phenomena induced by the Coulomb interaction in Weyl fermions,” says Nagaosa.