Controlling an unusual ordering of charges could boost superconducting behavior 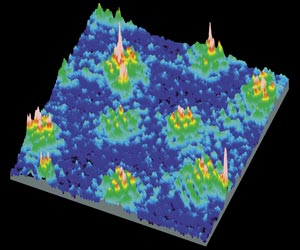 By studying the properties of electrons in a superconductor, RIKEN researchers have uncovered the origins of two mysterious patterns, potentially enabling them to design better superconductors.

Superconductors carry an electrical current with no resistance, and they are already used to make strong electromagnets. But present superconductors exhibit superconductivity only at very low temperatures. Researchers have been trying for decades to find materials that superconduct closer to room temperature, which would open the door to much wider application.

Now, Tadashi Machida, Tetsuo Hanaguri and colleagues at the RIKEN Center for Emergent Matter Science have probed the behavior of electrons in the cuprate material Bi2Sr2CaCu2O8+δ, which superconducts at the relatively high temperature of -183 degrees Celsius1.

They used a technique called spectroscopic-imaging scanning tunneling microscopy (SI-STM), which launches a beam of electrons from a very fine tip that scans the surface of a sample. It provides information about the density of electrons at different points on the material and maps the changes of those densities at a range of energies.

The researchers applied a strong magnetic field to the cuprate as they studied it. This generated whorls of superconductivity in the material, called vortices, which partly suppress the superconductivity. Under these conditions, SI-STM revealed that electrons appear to cluster into one of two patterns that are unique to cuprates. This process—called charge ordering—may play a fundamental role in cuprates’ high-temperature superconductivity.

In the first pattern, the vortices arranged themselves into a grid resembling a chessboard (Fig. 1). The researchers’ measurements showed that this grid is actually an interference pattern caused by scattering electrons.

In the second pattern, which occurred at a higher energy, electrons clustered into a thin thread called a nanostripe. The strong magnetic field made this nanostripe more intense, suggesting that greater charge ordering would be accompanied by more of the vortices that stifle superconductivity.

“This is direct evidence of the competition that exists between superconductivity and charge order,” says Machida. “Our findings suggest that tuning electron correlation to suppress charge order might be important in the design of future superconductors.”

The team now plans to use SI-STM to investigate other exotic electron states in cuprates.