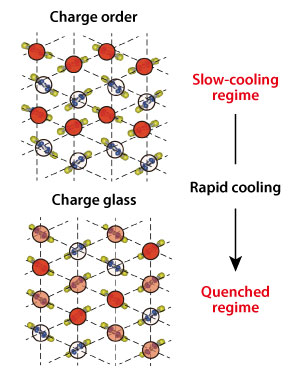 Figure 1: The low-temperature state of a correlated-electron material depends on whether it is cooled slowly (top) or rapidly (bottom). © 2016 WILEY-VCH Verlag GmbH & Co. KGaA, Weinheim

A liquid slowly cooled past its melting point forms a solid with a well-ordered, crystalline structure. On the other hand, if the same liquid is suddenly plunged below its melting point, its atoms or molecules are frozen in the same random arrangement they had when a liquid. Such solids are known as glasses.

Two RIKEN scientists have now found that a similar effect also occurs in correlated electron materials—intriguing materials that exhibit exotic properties because their electrons interact with each other via their spin and charge. Fumitaka Kagawa of the RIKEN Center for Emergent Matter Science and his colleague Hiroshi Oike discovered that the low-temperature state of such materials depends on how rapidly they are cooled1.

If a correlated electron material is cooled slowly, it will eventually settle into an arrangement that minimizes its energy, appropriately named the ground state. This is roughly analogous to the well-ordered periodic structure of a crystal.

However, Kagawa and Oike discovered that if the cooling rate is faster than a certain value, several correlated-electron materials do not enter the ground state but instead are frozen into a different charge or spin state—a bit like a glass.

For example, a material known as θ-(BEDT-TTF)2RbZn(SCN)4 usually exists in a state known as a charge order or charge crystal at temperatures below 200 kelvin. However, if it is cooled fast enough, it becomes a ‘quenched charge glass’, which has very different electronic properties (Fig. 1).

This finding goes against the received wisdom in the field. “Many condensed-matter researchers think that the low-temperature state of a material is uniquely determined in terms of energy and so the material always enters the ground state,” says Kagawa. “We show that this common belief is not necessarily true.”

The reason why this effect has not been noticed until now is because in most experiments on correlated electron materials, samples are slowly cooled at no more than a leisurely half a kelvin per second. But new cooling techniques that use laser or current pulses can cool at hundreds or even thousands of kelvins a second.

The researchers believe that this phenomenon could be used in devices known as phase-change memories, which store data by using these states of matter to represent the ones and zeros used in computing. “We aim to develop a new class of high-speed nonvolatile memories that are based on the ground state and the quenched state,” says Kagawa.