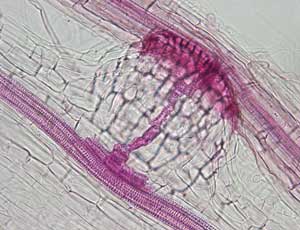 Figure 1: A microscopy image of a haustorium infecting a host root. © 2016 Plant Cell

RIKEN researchers have gained a deeper understanding of how specialized structures develop that allow parasitic plants to feed off other plants. They expect this will lead to more effective control of these parasites and hence benefit agriculture.

Through an invasive organ known as a haustorium (Fig.1), the parasitic plant Strigasiphons nutrients from the roots of crops such as sorghum, maize and rice, significantly reducing yields in Africa and Asia. The researchers have discovered that auxin, a well-known plant hormone, plays a crucial role in haustorium formation1.

Striga is difficult to study in the lab because it requires a host plant. For the past decade, Ken Shirasu of the RIKEN Center for Sustainable Resource Science and his team have investigated the closely related plant Phtheirospermum japonicum as a proxy for Striga. “Nobody else was working with it,” Shirasu says. “We had to set up everything, from the transformation system to the genomics tools.”

The team is now reaping the rewards of that work. Using a combination of RNA sequencing and microarrays, they assessed which genes were expressed in P. japonicum following a chemical treatment to induce haustorium formation. They identified 327 genes with altered expression at different times after the treatment, generating a series of snapshots of the genetic steps in haustorium development. 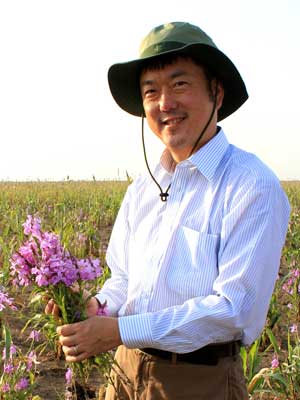 Figure 2: Ken Shirasu holding Striga flowers in a field of sorghum infested by the parasitic plant in Sudan, Africa. © 2016 RIKEN

Several of these genes are related to plant hormones, particularly auxin. While earlier experiments with auxin inhibitors had implicated auxin in haustorium formation, it was unclear whether this was an indirect effect of interfering with auxin, which is involved in most aspects of plant development. The new data revealed that an auxin biosynthesis gene, YUC3, is activated in specific cells starting 6 hours after the treatment.

“When I saw that YUC3 is uniquely expressed in the cells that detected the host plant, I thought ‘Wow! This must be a very important gene,’” says Shirasu.

To confirm the importance of YUC3, the team engineered plants in which the gene was deactivated. These plants often failed to form haustoria and infect host plants. By contrast, plants with increased YUC3 formed a haustorium-like organ even when hosts were absent.

Although these results will not immediately help with controlling Striga infections, they will assist scientists to investigate the mechanism directing this process. “This is an anchor point from which we can explore which genes induce YUC3 and which genes are induced by it,” says Shirasu. The team has identified candidate genes acting downstream of YUC3, including genes that may be involved in controlling the host.