Microbiologists and immunologists at RIKEN collaborate to better understand the role in health and disease played by bacteria in the human gut.

Over the past decades, researchers at RIKEN have advanced our understanding of the role in health and disease played by bacteria in the human gut. Microbiologist Yoshimi Benno has used cell culture and genomic tools to describe the relationship between diet, the gut microbiota, and wellbeing. Immunologist Hiroshi Ohno has extended the analysis to an investigation of how gut bacteria communicate with immune cells. Combining Benno's focus on bacterial composition with Ohno's research into their function has led to many important insights.

Herbivores have demanding eating habits. Cows spend a third of their lives grazing. Koalas devote their few waking hours to chewing on eucalyptus leaves. And giant pandas can consume more than 12 kilos of bamboo a day. All of them rely on microbes in their guts to break down the long sugar molecules and digest their cellulose-rich meals.

Humans are no different. Our intestines host trillions of bacteria that produce essential nutrients from the foods we eat. Microbiologists have long been interested in these indigenous microbes, and, until two decades ago, the only way to study them was to isolate and grow the bacteria on a dish. Researchers at RIKEN have discovered hundreds of new bacterial species in this way, through more than 60 years of work in the area using innovative breeding techniques to simulate the internal gut environment, for example by tightly sealing fecal samples in glass jars.

But culturing these bacteria has proven trickier than expected. Their nutrient regimens are often unknown, and growing them on conventional broths would be like putting a koala on a chocolate diet. Just as humans rely on bacterial products to survive, so do the bacteria themselves. At RIKEN, we developed a membrane filter technique that used the products of one group of bacteria to grow another group, which has introduced us to several more previously unidentified gut bacteria1.

Nevertheless, of the species represented in the human intestines—as many as a thousand—more than half are still believed to be uncultured. 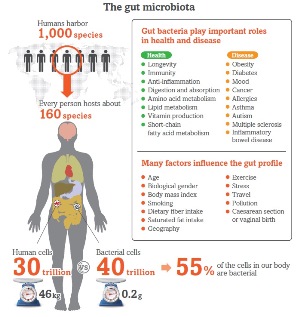 In the mid-1990s, researchers began exploring ways to study these bacteria without having to culture them. These molecular methods offered a more holistic picture of the gut microbiota. We developed one such process at RIKEN for comparing the diversity of microbial populations between people, called terminal restriction fragment length polymorphism (T-RFLP). The technique involves fluorescently tagging and multiplying all of the bacterial DNA in a sample. Special enzymes then chop the DNA at identically coded regions, and the strands are sorted. Fragments with similar sequences and lengths typically belong to bacteria of the same species. We first used this technique to observe significant differences in the fecal microbiota of patients with inflamed and ulcerated intestines compared to healthy individuals2.

More advanced, high-throughput gene sequencing technologies have emerged to greatly speed up the process of discovery.

Then in 2006, American biologist Jeffrey Gordon published a paper in Nature that blew us all away. The paper revealed that obese and lean mice and humans had different microbial compositions. I couldn’t believe it. How could such a small community confined to tubular networks in the lower abdomen control the state of the entire body? Might there be more to their powers than previously imagined? Several years later, I found evidence of microbial influence not just on obesity, but on hormone levels in the brain and on aging. Sanitized mice raised in germ-free conditions produced twice as much dopamine compared to those injected with germs from conventional mice3. We even found differences in the microbial balance of elderly individuals living in urban towns and those from villages famous for their longevity.

Alongside these studies, many researchers also wanted to find out how they could control, and potentially alter, microbial diversity. Diet was an obvious conduit. In the mid-1980s, a colleague and I made ourselves the subjects of such experiments by living on an entirely carnivorous diet. Every day, for 40 days, we consumed 1.5 kilograms of beef, and then sustained ourselves for the next two weeks on vegetables. We observed a distinct change in the bacterial cultures grown from our fecal samples.

Molecular studies extended the depth and breadth of such analyses. Our lab has collaborated with several companies to test the effects of different foods on gut microbial diversity, and human health. For example, mice fed a mixture of the amino acid arginine and friendly Bifidobacterium produced more polyamine compounds in their colons. In the long-term, they experienced less inflammation and age-related memory loss, and lived longer than mice fed a regular diet4.

But food is not the sole determinant of microbial diversity. Age, gender, body mass index, exercise and smoking habits all play a role. My lab conducted a T-RFLP analysis on close to 4,000 stool samples donated by Japanese who have attended my public lectures over the years, and identified eight distinct microbial profiles, from the seaweed lover to the elderly female. In 2014, I collaborated with Yu Sawai, who launched a company that provides paying customers with stool reports. Preventing disease could soon be as simple as tracking our bowel movements.

When the world’s geneticists finished sequencing the human genome in 2003, they went looking for their next big project. Some codified the oceans, others took to transcribing chimpanzees and a few strung together Neanderthal DNA from fossilized bones. RIKEN chose to be more introspective. In a pivotal meeting between director of the former RIKEN Genomic Sciences Center, Akiyoshi Wada, and microbiologist Tomotari Mitsuoka, the two decided to focus their sequencing efforts on the human gut microbiota. I was invited to the meeting and, as an immunologist specializing in the intestines, was greatly in favor of the decision.

By the early 2000s, microbiologists working with gut microbes had a general sense of what they did, especially in their capacity as nutrient couriers. But the specifics were hazy when it came to their protective role. Immunologists knew, for example, that germ-free animals were more susceptible to infections, which meant that the immune system was somehow working together with the gut bacteria. Genomics offered a way to capture the conversation. 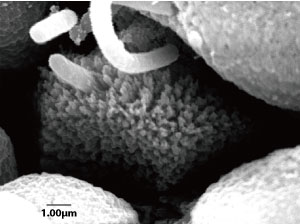 The most popular genomics technique is known as shotgun sequencing. Typically, ultrasonic waves fired at an entire population of microorganisms taken from a sample slice the bacterial DNA sequences at random locations, and the fragments are sequenced and analyzed to produce a distinct genomic profile of the population.

By profiling samples from different individuals, researchers can begin to distinguish between healthy and unhealthy communities. The guts of individuals with diabetes, obesity or inflammatory bowel disease look very different from those of healthy individuals. Some studies have even found that transplanting fecal microbes from a healthy person to, for example, someone infected with the pathogenic bacteria Clostridium difficile, can restore the microbial balance to cure the disease.

The immune system maintains a cautious friendship with its resident microbes, the way one would with a tantrum-prone child—generally a source of enjoyment until a sudden flare-up brings immeasurable grief. Shotgun studies were able to introduce the different parties involved in the relationship, but I wanted to find the interpreter. In 2009, we conclusively pinned that role down to M cells lining the gastrointestinal tract, distinguished by their lack of a brush-like fringe typical of most epithelial cells5.

To initiate an immune response, M cells engorge bacteria and spit them out the other end. We used a microarray-based approach to screen for genetic material specifically expressed by M cells, and discovered an mRNA called Gp2. Without Gp2 protein activity, mouse models could not defend themselves against harmful Salmonella Typhimurium.

Eventually even genomic studies reached their scientific limits. They had introduced immunologists to the multiple characters on the scene, but we wanted to understand the language of communication. To make sense of the internal noise, our lab at RIKEN consolidated the many different exhaustive studies of biological products, including catalogues of DNA and RNA, but also directories of proteins, lipids and metabolites.

Using this multi-omics approach, we discovered that a short-chain fatty acid, acetate, produced by beneficial Bifidobacterium is not only an essential source of energy, but also protects hosts from deadly infections6. We later also found that another fatty acid, butyrate, produced by the faithful bacteria Clostridia can accelerate the differentiation of immune cells that suppress inflammatory and allergic responses7. These molecules transmit information that regulates our immune system.

We are applying similar comprehensive techniques, even combining clinical data, to identify the conveyors of other signals. I am leading a major initiative launched by the Japanese government in 2016 to invest millions of yen in research projects studying the crosstalk between the microbiome and host organisms. Ultimately, we hope to eavesdrop on all the chatter in the human gut, between bacteria and immune cells as well as among the bacteria themselves.

Yoshimi Benno received his Doctor of Veterinary Medicine in 1972 from Rakunogakuen University and his PhD in 1982 from the University of Tokyo. He joined RIKEN as a researcher in 1974, and in 2004 became head of the Japan Collection of Microorganisms at the RIKEN BioResource Center. Since 2009, Benno has been heading the Benno Laboratory at the RIKEN Innovation Center. His research interests are in microbial taxonomy and the gut microbiota, with a specific focus on finding new ways to culture bacteria and investigate the effect of functional foods, probiotics and prebiotics on gut bacterial communities.

Hiroshi Ohno received his Doctor of Medicine in 1983 and PhD in 1991 from Chiba University, Japan. He spent three years as a postdoctorate researcher at the National Institutes of Health in the United States before returning to Chiba University as an associate professor. In 2004, Ohno joined RIKEN as a team leader at the former Research Center for Allergy and Immunology. He is now a group director at the RIKEN Center for Integrative Medical Sciences. Ohno’s primary research interests involve the relationship between the host and gut microbiota, with a focus on intestinal epithelial M cells, and the role of gut microbiota in the intestinal immune system as well as in host health and disease.