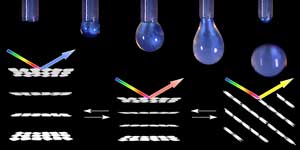 Figure 1: Droplets of ‘photonic water’ (top) can change color by using chemical or magnetic forces to adjust the alignment of internal stacks of reflective nanosheet crystals (bottom). Reproduced from Ref. 1 and licensed under CC BY 4.0 © 2016 K. Sano et al.

A serendipitous discovery by RIKEN researchers has yielded a liquid that can reflect light over a wide range of wavelengths: from the ultraviolet to the infrared—the widest range ever reported1. The liquid, which the researchers dubbed photonic water, could be used in telecommunication systems and lasers.

Ultrathin crystals known as titanate nanosheets are useful for cleaning up organic contaminants. Yasuhiro Ishida from the RIKEN Center for Emergent Matter Science and his colleagues previously found that these nanosheets also take on remarkable properties when immersed in water. For instance, they can form soft hydrogels that expand and contract in response to stimulus, just a like a human muscle (see feature highlight).

Freshly synthesized titanate nanosheets typically have a range of sizes, which makes it tough to understand their intrinsic properties. To remedy this, the RIKEN team attempted to sort a titanate emulsion by size using a centrifuge. But they failed, as nanosheets of all sizes were collected after centrifuging. However, the remaining solid had intriguing properties: when redissolved in water, the previously transparent mixture transformed into a vivid purple solution.

According to Ishida, this surprising purple indicated the nanosheets had arranged into an ordered structure that can reflect light—completely unexpected since liquids are generally very disordered by nature. “When my student Koki Sano first told me about the color change on centrifugation, I couldn’t believe it,” recalls Ishida. “I thought it was contamination and asked him to repeat the experiment.”

Further tests revealed that centrifugation removed an ionic contaminant that blocked the large electrostatic repulsive charges between neighboring nanosheets. When redispersed in water, these crystals were free to push each other hundreds of nanometers apart into an ordered framework, while still retaining a water content of over 99.5 per cent.

The researchers explored several ways to control this new substance. The simplest was to just reduce the nanosheet concentration from 0.50 to 0.09 per cent. This seemingly small change tuned the reflected light wavelength over an extraordinarily wide range—from the ultraviolet to the infrared. The team realized enhanced color output by using external magnetic fields to align the crystals into more tightly ordered domains. In addition, subtle changes to the solution’s pH produced striking blue, green, and red color changes over a far more sensitive range than conventional pH indicators.