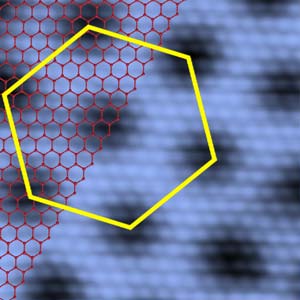 The quality of graphene can be assessed from patterns produced in electron microscopy images, three RIKEN researchers have found1. This new way of evaluating these carbon sheets, which are just one atom thick, could help to improve the manufacturing process of this prized material.

Graphene’s carbon atoms are arranged in a hexagonal honeycomb pattern that makes the material strong, transparent, flexible and conductive. Researchers hope to use the material in various applications, such as the touch-sensitive screens of smartphones.

The best way to make high-quality graphene sheets is a process called chemical vapor deposition, in which a gas deposits carbon atoms onto a hot metal foil. But making large sheets of single-crystal graphene by this method is difficult.

To solve this problem, researchers need to pinpoint the positions of graphene’s carbon atoms relative to the metal atoms beneath and measure the strain in the graphene sheet, which can cause wrinkles that affect its electronic properties. The strain is thought to arise due to temperature changes that cause graphene and metal to expand and contract at different rates.

Normally, STM would image only the positions of the uppermost layer of carbon atoms and would not show the metal atoms in the foil underneath. But when two repeating patterns are overlaid with a slight twist, it can create a form of interference called a moiré pattern.

The researchers have developed mathematical tools that allow them to extract moiré patterns from STM images (Fig. 1), from which the relative positions of carbon and metal atoms can be determined. They found that the graphene honeycomb twisted less than 1.5 degrees relative to atoms of the metal iridium in a foil beneath, whereas graphene on platinum could twist between 3 and 23 degrees, depending on the synthesis conditions.

The method also allows the strains in a graphene sheet to be calculated. Crucially, it showed that the strain depends not only on the difference in the thermal expansions of the materials, but also on the way the carbon and metal atoms bind together.

“This analysis can help to control the synthesis parameters to improve graphene quality,” notes Kim.

The team intends to extend the method to other metal substrates used for growing graphene.