Developing a new precision calculation method with the goal of being the No.1 globally 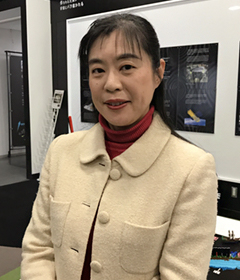 Decoding the structures of nuclei is no easy task. While the well-known Newton equation explains that objects gain speed when they fall, the Schrodinger equation is a basic equation for the microscopic world based on the Newton equation. However, solving problems accurately using this method is very difficult when the number of neutrons and protons in a nucleus is three or more. In our research, we take on the challenge of solving basic equation problems with as many bodies as possible. This is our research.

Communication can provide solutions when you encounter obstacles

In December when I was in my third year of high school, just before taking the entrance exam, I learned about the nucleus and became interested in wonders in the invisible world. As I was eager to learn more, I changed my ambition from working in the field of medicine to that of physics.

When I was in the junior year, I attended a lecture by my former teacher, Professor Masayasu Kamimura, where I learned that if we master multibody calculation theory, we can engage in global front-line research, and this ignited my interest in this area of study. Attracted by the phrase“global front-line research,” I decided to specialize in nuclear theory at graduate school so that I could be involved in this fascinating world. However, I found it mathematically difficult to advance from three-body calculation, which I had already managed, to four-body calculation. After half a year of struggling, I succeeded in devising a user-friendly mathematical method that paved the way for the future.

Every researcher knows that difficulties come with the territory. Theory-based calculations often bring unexpected results. When I run into an obstacle, I always try to have a conversation with something, as I don’t think that thinking by myself will get me anywhere. Expressing things in words often gives my ideas logical sense and makes me aware of important things. In some cases, a problem can be solved instantly by an interpretation or hint that came from someone else entirely. Whenever I write a thesis, I overcome problems by having discussions with people around me.

I travel to tropical islands with female friends a few times a year to refresh myself, and there I don’t think about research, I just enjoy myself and chat with my friends for refreshment of mind and body. When I feel stress in my daily life, I make it a rule to relieve it immediately.

Believing in myself and pursuing my greatest passion

My husband is also a researcher and we live halfway between our workplaces, commuting one and a half hours to work. We live in two houses located 30 meters apart. Researchers have strong personalities and persistency, and even married couples rarely compromise. So, we go to work after having breakfast together, go back to our respective houses to do our respective work at night, but spend weekends together. In this way, we have been leading a somewhat peculiar lifestyle for 13 years and maintaining a good relationship since our marriage.

I hope that young students today will move forward and believe in themselves. Young people have any number of chances to start afresh. I initially had no concrete life plans, but luckily I had good encounters at some pivotal points. I believe that everyone has similar encounters, and if you are aware of your good fortune, make use of it, and align it with what you want to do, the path will open up before you. Never think you can’t do it, but move forward boldly toward what you want to do.