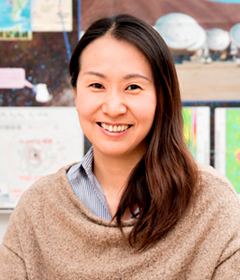 Is an environment like that of our solar system commonly found in the universe, or is it very rare? By discovering the answer to that question, I hope to understand how rare the existence of life and eventually of human beings is, and that is a driving force behind my research. Using radio telescopes, I study how the new stars are formed from gas and dust outside the solar system, and the envelope/disk structures of the surrounding gas and dust, it’s chemical composition, temperature, and gas kinematics. The radio telescope ALMA, which became partly operational in 2011, has especially remarkable accuracy compared to its predecessors, making it possible to see what is happening in considerable detail.

Deciding to have a child, encouraged by my supervisor’s words

My father bought me a small telescope when I was in lower grades of elementary school. The sight of moon-craters and Saturn’s rings thrilled me, and that was how I started to take interest in outer space. Then, when I was in high school, I was profoundly moved by the Leonid meteor shower and set my heart on being an astronomer. While at university I began thinking I wanted to explore the origin of the solar system, and applied for a masters’ program, deciding that if I could not enter my field of interest I would get an ordinary job instead. After entering the masters’ program, however, I declared that I would continue my research for life in whatever form.

I had my first child in 2012 when I was an assistant professor and my second in 2015. My husband is also an astronomer, so I am lucky in that it is easier to obtain his understanding. However, I still had concerns before having my child that the quality of my research would fall temporarily, and was plagued by worries. Prof. Satoshi Yamamoto, my boss at the time, gave his full support, saying, “I will take over all the miscellaneous tasks, so you focus on the science that only you can do.” I was truly moved by this and gave birth to my first boy in my fourth year as assistant professor.

I returned to work after a maternity leave of six weeks before and eight weeks after childbirth. At first, my work efficiency went significantly down and it took about a year to return to normal. My life shifted from that of a night owl to that of an early bird, and I do not work overtime. Now, I segment time in units of 15 minutes or one hour, and seek to boost my productivity by thinking about what can be done within that timeframe. Upon returning home, my mind is so completely switched over it is sometimes difficult to turn it around, even if I want to return to work after the kids are asleep.

A mind that takes an interest is the starting point

After finishing my Ph.D., I was lucky enough to get a position as an assistant professor, but I had prepared myself for various careers, since I had decided that I would continue my research in whatever form. Considering the possibility of going abroad as a postdoc, I pushed myself and finished my doctoral thesis half a year earlier and earned my Ph.D. in September. I also earned a teaching license, considering the possibility of becoming a cram school teacher or a tutor.

If you want to continue your research, have a Ph.D. and personal computer, shed your ego and pride and you will find a way. In fact, I know someone who went to work at an ordinary job and then returned to her field as a curator. If you continuously pursue something that fascinates you, you will eventually be recognized. There is no need to settle on a single area for life: it is all right to move to another whenever you find something that captures your heart. Oddly enough, nature has many things to tell you when you take heartily interest in something.

I would like people who aspire to become researchers to follow their passion. It is only natural for research not to go as you expect. Your expectations may be betrayed time and time again, but be entertained by the unexpected facts and hardships you encounter, and they will lead you to your next challenge. I have high hopes for the future of those who have such positive mentalities.