A new compact neutron source for a safer society 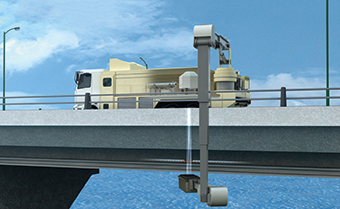 During the period of Japan’s “economic miracle” from the mid-1950s to the early 1970s, many elevated highways and bridges were constructed. Today, there is significant concern about the condition of this aging infrastructure. To deal with this, there is a need for non-destructive technology that will allow the inside of a structure to be examined without damaging it.

Today, x-rays are widely used for this purpose. However, x-rays do not easily penetrate materials made up of heavy elements. Currently, x-ray CT scanners can penetrate only about one centimeter into a steel plate. This makes it difficult to examine structures with thick steel beams embedded in bulky concrete.

A potential solution to this is the use of neutrons, which are uncharged and can easily penetrate heavy elements. They can penetrate beyond three centimeters of steel and more than 50 centimeters of concrete.

Another weakness of x-rays is that although they are used to examine atomic-scale structures, it is difficult to use them to detect light elements such as hydrogen and lithium. Neutron beams can do this. Neutron beams are particularly good for observing hydrogen, making it possible to detect the water content of a material.

Even though neutron beams are advantageous in this way, however, they have not been widely used in the past because of the requirement for a large facility, such as a nuclear reactor or large accelerator, to produce the neutrons.

At the Center for Advanced Photonics, the Ultrahigh Precision Optics Technology Team, under Yutaka Yamagata, and the Neutron Beam Technology Team under Yoshie Otake, are working to develop a compact neutron source, named RANS. They have successfully developed a relatively small instrument, just 15 meters long, which accelerates protons and then creates a neutron beam by colliding them with a beryllium target.

A bolt observed with X rays and neutron imaging

This instrument could be installed on a factory production line to inspect for errors or could be used to promote innovation in a wide range of industrial sectors by being used to examine new materials and devices. For example, Team Leader Yamagata points out that “It could be used to improve the performance of lithium ion batteries and fuel cells by measuring the movements of hydrogen and lithium, which are critical for their function.”

According to Team Leader Otake, “If we can make it even smaller and mount it on a truck, we could develop a mobile system for inspecting the safety of infrastructure. We are aiming,” she continues, “to create a system that can non-invasively inspect the structural soundness of bridges by detecting steel fractures and their water content. One of the main reasons for the deterioration of bridges is metal rust. Using experiments with RANS, we have confirmed that we can use the device to non-destructively inspect the rusting of metal. It is said today that the prevention of rust is a ten-trillion-yen industry. If we can use the neutron beam to accurately detect and estimate the deterioration of steel beams in concrete, we will be able to prevent accidents and allow repair and maintenance at reduced cost.”