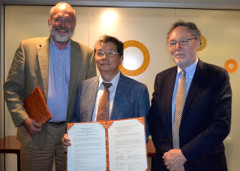 On August 8, the RIKEN Center for Life Science Technologies (CLST) signed an agreement with the National High Magnetic Field Laboratory (NHMFL) in the United States to conduct collaborative research in the area of super high-field magnets. They will focus efforts on developing new nuclear magnetic resonance (NMR) machines, which are used in areas such as protein analysis, by focusing on research in the area of high-temperature superconductivity. Ultimately the two centers hope to become leaders in the development of high-temperature superconducting NMR devices. This project is supported by the Japan Science and Technology Agency’s Strategic Promotion of Innovative Research and Development program.

According to Hideaki Maeda, the director of the RIKEN CLST NMR Facility, “We are making progress in high-temperature superconductivity thanks to support from the Japanese Ministry of Education, Culture, Sports, Science, and Technology. By using this technology, we will be able to build magnets with unprecedented strength, and this will have a major impact on NMR technology. With the partnership agreement we are signing today, our two organizations, which are pioneers in the field, will cooperate to incorporate high-temperature superconducting technology into a wide range of fields around the world.”

The signing ceremony was held at Florida State University in the United States. The agreement was signed by Hideaki Maeda and CLST Director Yasuyoshi Watanabe for RIKEN, and by Gregory Boebinger, Director of the NHMFL and David Larbalestier, Director of NHMFL’s Applied Superconductivity Center. “It will be a huge pleasure working with Professor Maeda’s group who have led the application of high temperature superconductors to NMR magnet applications.” said Dr. Larbalestier.