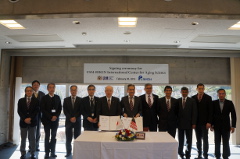 On February 20, representatives from Universiti Sains Malaysia (USM) visited the RIKEN Wako campus to sign a comprehensive research agreement between the two institutions.

Research collaboration in a variety of fields has been conducted between the two institutes since 1993, when a USM researcher was hosted at RIKEN, and has developed based on varying agreements including a Memorandum of Understanding signed in April 2012, as well as an Agreement for International Joint Graduate School signed in November 2008 that allowed students from USM to come to RIKEN to carry out research projects.

Under the current agreement, which aims to encourages the two institutions to use the fruits of their collaborations to solve problems facing humanity, calls for the establishment of a joint laboratory at USM and for the further strengthening of joint research and personnel exchanges.

At the signing ceremony, RIKEN President Ryoji Noyori said, “One of RIKEN’s missions is to contribute to the global society through science and technology, and I am very excited at the prospect that under this agreement we will be able to carry out research through which we can offer a better environment to present and future generations.” In his own greeting, USM Vice Chancellor Omar Osman said, “We are delighted to sign this agreement with RIKEN, which is a world leader in numerous research areas. The joint laboratory that we will establish under the current agreement will focus on bringing together our research in the area of aging science as a means to contribute to global society, and I also believe that it will be of great use for working with RIKEN to train future scientists.”