iPS and embryonic stem cells: not quite the same 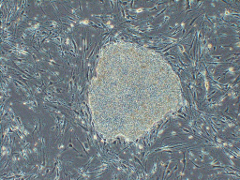 In research recently published in Cell Cycle, a group of scientists led by Piero Carninci of the RIKEN Center for Life Science Technologies analyzed the genes that are transcribed in the nuclei of embryonic stem cells and iPS cells—a type of cell that is reprogrammed from normal somatic cells with the intention to have them act like stem cells—and discovered that there are significant differences between the two.

There has been discussion in recent years about whether iPS cells—which are reprogrammed through the insertion of four “Yamanaka’s factors”—are really functionally equivalent to the stem cells they are supposed to substitute for, and as a result, whether the current technology for producing these cells is adequate. iPS cells have attracted attention for their potential role in regenerative medicine, since, unlike embryonic stem cells, they can be derived from cells taken from the patient’s own body, eliminating some thorny ethical issues.

What these findings signify, according to Carninci, is that “current iPS cell programming protocols do not create cells that are functionally identical to natural embryonic stem cells, and this means that we have to be cautious when using such cells. I would emphasize, though, that nuclear CAGE technology has allowed us to see the differences clearly, and this means we have a new tool at our disposal to better understand what we bring into therapy."