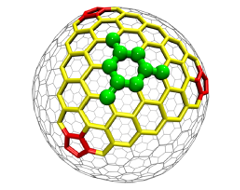 The red sections are high-strain pentagon “vertices” that differentiate fullerenes from graphene.

Fullerenes—also known as “buckeyballs”—are ball-shaped molecules named after American inventor Buckminster Fuller. They are, along with graphene and nanotubes, a form of carbon that has opened a new frontier in nanotechnology. Since their discovery in 1985, fullerenes have found applications as antiviral medicines and antioxidants, and also are being contemplated for use in electronics owing to their unique chemical properties. Despite their demonstrated potential, their fundamental properties are yet to be explored in any great detail.

Recently, a group of scientists from the RIKEN Advanced Institute for Computational Science (AICS) and the University of Sydney have made use of the tremendous power of the K computer, together with the NTChem software developed at AICS, to provide new insights into the properties of fullerenes. The group has used quantum chemistry calculations to predict, with high accuracy, the property known as the heat of formation—essentially a measure of how much energy is generated or consumed for the formation of chemical bonds in a molecule. This property is important for comprehending how readily a compound will form. In their investigation, the scientists have made a very precise prediction for not only C60, which is the most common fullerene, but also a series of larger fullerenes, including C360, which has 360 carbon atoms.

According to Bun Chan of the University of Sydney, the first author of the study, “The results of this project suggest an important contributing factor for the unique properties of fullerenes and other types of nanomaterials. We find that the heats of formation for fullerenes become closer to that of graphene as the number of carbon atoms increases, but only at a slow pace. Our hypothesis for this observation is that the five-carbon structures in fullerenes create significant strains that do not exist in graphene. This may provide an explanation of how fullerenes behave differently from graphene. Only when the fullerenes become much larger do they become flat enough to act more like graphene.”

“Importantly,” he adds, “we have created a framework to enable straightforward computational studies of a wider range of properties of fullerenes and nanomaterials more generally.”

As stated by AICS Director Kimihiko Hirao, who led the research group, “We hope that our framework will help spark increased interests in the computational investigation of nanomaterials, and in turn further accelerate the already rapid development of nanoscience.” The paper that describes their results, “From C60 to Infinity: Large-Scale Quantum Chemistry Calculations of the Heats of Formation of Higher Fullerenes,” has been published in the Journal of the American Chemical Society.