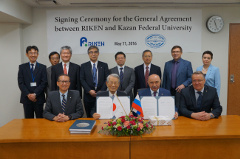 On May 11, a ceremony was held at RIKEN’s headquarters in Wako, Japan for the signing of a comprehensive research agreement between RIKEN and Kazan Federal University. The relationship between the two institutions began in 2010 with the signing of a memorandum of understanding on research cooperation in the area of low-temperature physics, leading to the establishment of a joint research laboratory at KFU. Following that, joint work in the area of biofunctional synthetic chemistry was launched on the occasion of a workshop, and in 2014 a joint laboratory in that area was set up at KFU. Further, in the area of life sciences, memoranda of understanding were signed between RIKEN, KFU, and the Tatarstan Cancer Center in 2014, and between RIKEN, KFU, and Juntendo University Hospital in 2015. In December of that year, a joint research laboratory in life sciences was set up at KFU. The new agreement integrates the past research projects, which were done on an individual basis, into an overall framework. At the signing ceremony, KFU Rector Ilshat Gafurov emphasized that the current agreement is a fruit of the past work, and additionally that Russian universities have been placing special focus on collaborations with industry in recent years, and that the collaborations between his institution with RIKEN not only represent an expression of the desire to work together to resolve pressing global issues, but also that they show the will of the institutes to contribute to innovation. He said he hoped that the research agreement would lead to collaboration between the two institutions in new areas.