Strengthening ties between Japan and Germany in machine learning 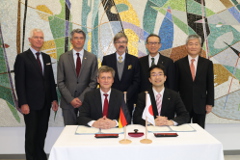 On March 15, a ceremony was held at the embassy of the Federal Republic of Germany in Tokyo for the signing of a memorandum of understanding between the RIKEN Center for Advanced Intelligence Project (AIP) and the Berlin Big Data Center (BBDC). Under the memorandum, the two institutions have agreed to encourage exchanges of research and academic materials, exchanges of faculty, and the holding of joint meetings focusing on machine learning.

In addition to representatives from RIKEN and BBDC, the ceremony was attended by German Ambassador Hans Carl von Werthern, Minister Stefan Mӧbs, and Counsellor for Science and Technology Ingo Hӧllein. The German Embassy also kindly provided the ceremonial space for the signing.