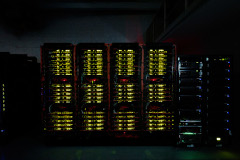 Photo of the new supercomputer

Osaka, Japan is now host to a new supercomputer, dubbed MDGRAPE-4A, which is dedicated to conducting molecular dynamics simulations for drug discovery. The computer, developed by the Laboratory for Computational Molecular Design at the RIKEN Center for Biosystems Dynamics Research (BDR), was put on display for the public at the RIKEN Osaka Campus Open Day on November 23.

In order to determine how proteins will change conformation in an aqueous solution, it is necessary to calculate the forces of the atoms that make up the protein and the surrounding water molecules, and to “move” the proteins inside a computer simulation. MDGRAPE-4A, which is designed to do this, has an overall power of 1.3 petaflops, but it is able to outperform more speedy general-purpose supercomputers due to its dedicated architecture. By modeling approximately 100,000 atoms that make up the proteins and water molecules, it can in one day carry out a simulation of approximately 1.1 microseconds (one millionth of a second). This allows it, on a realistic timescale, to model the interactions between drugs and proteins in the body. Understanding these interactions will make it possible to develop more effective molecular targeted therapies. The MDGRAPE-4A computer will be made available to academic and industry researchers around the world working in the area of drug discovery. In the future, the group plans to incorporate new elements such as artificial intelligence and hybrids of general-purpose and dedicated circuits to further improve the system.