Agreement on joint research in nuclear physics with institutes in Germany

On June 12, a ceremony was held on the joint campus of the GSI Helmholtz Centre for Heavy Ion Research (GSI) and the international Facility for Antiproton and Ion Research (FAIR) to commemorate the signing of an agreement on collaborative research (Memorandum of Understanding) in the area of nuclear physics. The agreement was made between the Japanese RIKEN Cluster for Pioneering Research (CPR), GSI and FAIR.

Chief Scientist Takehiko Saito of RIKEN CPR has had ongoing collaboration with GSI/FAIR, and it was decided to take this partnership further with the establishment of a joint laboratory. The joint laboratory will be headed by RIKEN Chief Scientist Takehiko Saito and Professor Christoph Scheidenberger of GSI/FAIR, with the aim of promoting collaborative research and expanding exchanges of researchers, including students.

The agreement was signed both on-site at GSI/FAIR and online. From GSI and FAIR’s side, Paolo Giubellino, Scientific Managing Director of GSI and FAIR and Jörg Blaurock, Technical Managing Director of FAIR participated. From RIKEN’s side, Dr. Shigeo Koyasu, Director of CPR participated. Additionally, Keitaro Ohno, State Minister for Cabinet Affairs in charge of Science and Technology Policy and Economic Security, visited GSI and FAIR on the same day and witnessed the signing, expressing his strong support for the cooperative relationship. 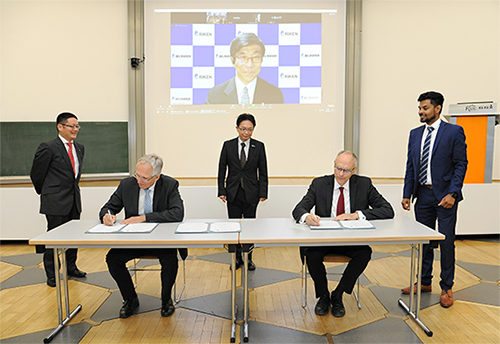 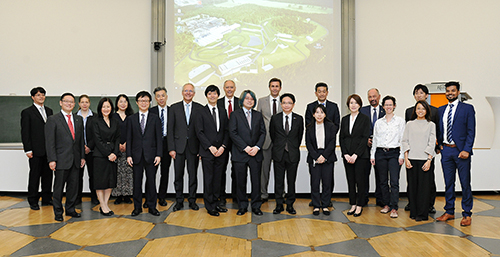