Working with mice genetically engineered to display symptoms of schizophrenia, neuroscientists at the RIKEN-MIT Center for Neural Circuit Genetics at the Picower Institute for Learning and Memory at MIT have uncovered a faulty brain mechanism that may underlie schizophrenia and other psychiatric disorders in humans.

The study, to appear in the Oct. 16 issue of Neuron, is the first to tie a specific brain network abnormality to schizophrenia, whose symptoms range from disorganized thinking, hallucinations and paranoia to an inability to plan for the future.

“Our study provides new insight into what underlies schizophrenia’s disordered thinking and zeroes in on a new target for future investigation into the neural basis of a cognitive disorder that affects more than 1 percent of the world’s population,” said Susumu Tonegawa, director of the RIKEN-MIT Center for Neural Circuit Genetics and senior author of the study.

Animal studies typically assess the neural mechanisms of the disease’s cognitive and behavioral symptoms through a combination of genetic and pharmacological treatments and behavioral testing. However, the complex nature of disorganized thoughts has made these studies challenging.

Human patients with cognitive disorders such as autism spectrum disorders and schizophrenia show abnormal neural activity in what’s known as the default mode network (DMN)--a network that includes the prefrontal cortex and the hippocampus, the brain structure believed to process memories. Because the DMN is involved in recall and future planning actions, understanding how it processes information and interacts with other brain areas could explain what goes awry in brain disorders.

RIKEN-MIT neuroscientists have created a genetically modified mouse with a gene mutation that some schizophrenia patients also harbor—the absence of the normal gene for an enzyme called calcineurin, which plays a crucial role in synaptic plasticity for learning and memory. The mice exhibit behavioral and cognitive abnormalities associated with schizophrenia.

After normal mice run a maze, their brains enter a resting state and start processing information related to the task they just performed, even reliving the route as if replaying a mental video. This kind of information processing plays a critical role in normal brain function, possibly as a window for communication between the neocortex, where long-term memory is stored, and the hippocampus. But in mice modeling schizophrenia, electrical activity in the hippocampus, one of the main components of DMN, surges when it should be idling.

When rodents run a maze, neurons within the hippocampus exhibit location-specific responses known as place fields. In normal animals, these location-specific responses are replayed in a series during rest periods following the task performance. However, the genetically altered mice did not reactivate place cells in an ordered manner after the task; they reactivated all these cells at an abnormally high level and almost simultaneously.

“Our study provides a novel way to look into the actions of current drugs and treatments and may lead to new insights for improved treatment of psychiatric disorders,” Suh said.

This work was supported by RIKEN Brain Science Institute and the National Institutes of Health. This press release was written by Debbie Halber. 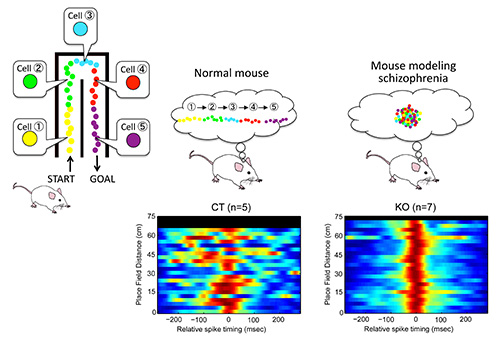