In the gut, immunity is a two-way street

In recent years, it has become increasingly clear that many diseases are triggered or maintained by changes in bacterial communities in the gut. However, the general view up into now has been rather simple: bacteria stimulate the immune system, leading to inflammation or autoimmune disorders in a single direction.

Now, in work published in Immunity, scientists led by Sidonia Fagarasan from the RIKEN Center for Integrative Medical Science in Japan have painted a more complex picture: the gut immune system does not simply prevent the influx of pathogens, but is actively involved in the maintenance of a rich and healthy community of gut bacteria. They propose that faults in the immune regulation lead to changes in the bacterial community that in turn feed back into the immune system.

In the study, the group demonstrated that the regulation by immune T cells of immunoglobulin A (IgA), an antibody that plays a key role in immunity in the gut, is critical for the maintenance of rich bacterial communities in mammal guts.

They began by studying mice with various immune deficiencies and attempted to restore the mice by providing the missing components. They monitored the bacterial communities in the mice's guts with or without the reconstitutions and evaluated the flow of information between the immune system and bacteria. They discovered that the precise control of IgA production by regulatory T cells is critical for keeping a rich and balanced bacterial community.

To investigate how bacteria feed back to the host, they looked at germ-free mice (mice born and maintained sterile in special incubators) and young pups that had been transplanted with different bacterial communities (either by injection of bacteria or by painting the fur with fecal bacteria extracts from normal or immune-deficient mice). They discovered that the immune system "sees" and responds differently to different bacterial communities. Rich and balanced bacterial communities seem to be perceived as "self" and induce a quick maturation of the immune system and gut responses (induction of regulatory T cells and IgA), while a poor and unbalanced bacterial community is apparently perceived as "non-self" and induces responses aimed at eliminating it (T cells with inflammatory properties and IgG or IgE responses).

According to Sidonia Fagarasan, who led the work, "This study should have an impact on the way we understand immune-related disorders associated with bacteria dysbiosis in the gut. In order to reestablish a healthy state we need to interfere not only with the bacteria, by providing probiotics or through fecal transplantation, but also with the immune system, by correcting the faults caused either by inherited deficiencies or by aging."

"It was surprising," she continues, "to see how the reconstitution of T cell-deficient mice with a special regulatory T cell type leads to dramatic changes in gut bacterial communities. It was spectacular to see how the immune system perceives and reacts to different bacteria communities. It gives us hopes that with a better knowledge of the symbiotic relationships between the immune system and bacteria in the gut, we could intervene and induce modifications aiming to reestablish balance and restore health." 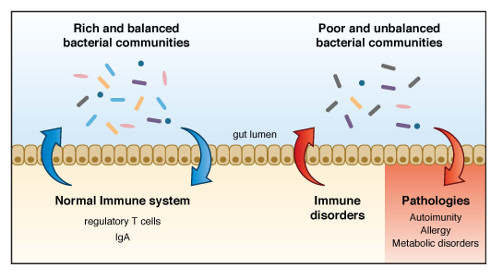