In a world-first achievement, scientists from the RIKEN Center for Emergent Matter Science in Japan, along with colleagues from the National Institute of Material Science and the University of Tokyo, have developed a new hydrogel whose properties are dominated by electrostatic repulsion, rather than attractive interactions.

According to Yasuhiro Ishida, head of the Emergent Bioinspired Soft Matter Research Team, the work began from a serendipitous discovery, that when titanate nano-sheets are suspended in an aqueous colloidal dispersion, they align themselves face-to-face in a plane when subjected to a strong magnetic field. The field maximizes the electrostatic repulsion between them and entices them into a quasi-crystalline structure. They naturally orient themselves face to face, separated by the electrostatic forces between them.

To create the new material, the researchers used the newly discovered method to arrange layers of the sheets in a plane, and once the sheets were aligned in the plane, fixed the magnetically induced structural order by transforming the dispersion into a hydrogel using a procedure called light-triggered in-situ vinyl polymerization. Essentially, pulses of light are used to congeal the aqueous solution into a hydrogel, so that the sheets could no longer move.

By doing this, they created a material whose properties are dominated by electrostatic repulsion, the same force that makes our hair stand end when we touch a van generator.

Up to now, manmade materials have not taken advantage of this phenomenon, but nature has. Cartilage owes its ability to allow virtually frictionless mechanical motion within joints, even under high compression, to the electrostatic forces inside it. Electrostatic repulsive forces are used in various places, such as maglev trains, vehicle suspensions and noncontact bearings, but up to now, materials design has focused overwhelmingly on attractive interactions.

The resultant new material, which contains the first example of charged inorganic structures that align co-facially in a magnetic flux, has interesting properties. It easily deforms when shear forces are applied parallel to the embedded nano-sheets, but strongly resists compressive forces applied orthogonally.

According to Ishida, "This was a surprising discovery, but one that nature has already made use of. We anticipate that the concept of embedding anisotropic repulsive electrostatics within a composite material, based on inspiration from articular cartilage, will open new possibilities for developing soft materials with unusual functions. Materials of this kind could be used in the future in various areas from regenerative medicine to precise machine engineering, by allowing the creation of artificial cartilage, anti-vibration materials and other materials that require resistance to deformation in one plane."

Schematic of the production process 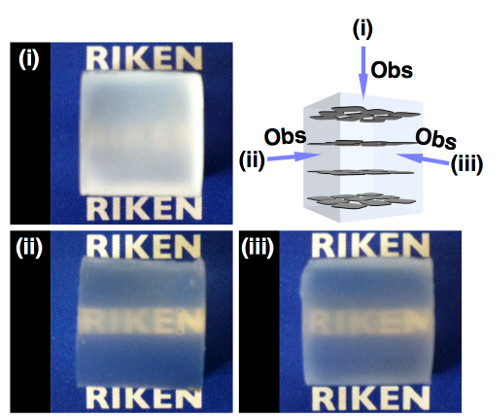 Optical features of the resultant hydrogel

The word RIKEN is seen through the material in the orthogonal (i) and parallel (ii, iii) directions to the magnetically oriented TiNS plane. 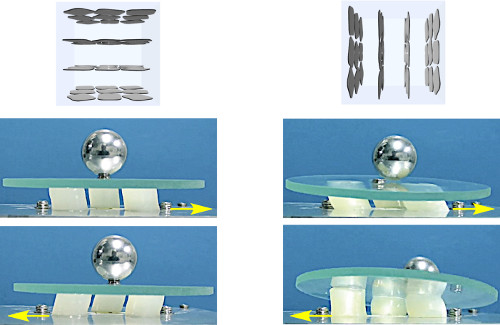 On a mechanical oscillator, a glass stage featuring a metal sphere on a tee was supported by three cylindrical pillars of magnetically structured hydrogel containing cofacially oriented TiNSs (0.8 wt%) in parallel (g) or orthogonal (h) direction to the cylinder cross-section.