Hot on the trail of the hepatitis-liver cancer connection

Using whole genomic sequencing, scientists from RIKEN in Japan have for the first time demonstrated the profound effect that chronic hepatitis infection and inflammation can have on the genetic mutations found in tumors of the liver, potentially paving the way to a better understanding of the mechanisms through which these chronic infections can lead to cancer. Primary liver cancer is the third leading cause of cancer death worldwide, and recent studies have shown that particularly in Asia, infection with either hepatitis B or C is often associated with such cancers.

For the study, which was published in Nature Communications, the group performed whole genomic sequencing on 30 individual tumors classified as liver cancer displaying a biliary phenotype. This type of cancer originates in the liver, but is different from hepatocellular carcinoma, the dominant form of primary liver cancer, and is generally more aggressive, with poorer prognosis. They compared the data with 60 of the more-common hepatocellular carcinoma tumors. To study gene expression, they then examined RNA sequencing data from 25 of the biliary-phenotype cancers and 44 hepatocellular cancers.

Surprisingly, they found that although the patterns of gene expression—as shown by the RNA sequencing—differed between the hepatocellular carcinomas and the liver cancers with biliary phenotype and depended on the histological type, the overall pattern of mutations in the cells was actually similar between the tumors—of either type—that had emerged in patients who had had infections with either hepatitis C or B, and were different in patients without such infections. This same kind of clustering is also found in cancers with well-understood etiologies, such as melanoma (UV light) and lung cancer (smoking). According to Hidewaki Nakagawa of the RIKEN Center for Integrative Medical Sciences, who led the team, "This is an interesting finding and could indicate that the cancers—even of different histological types—in patients with hepatitis infections could be derived from similar cells, perhaps hepatic progenitor cells. In patients without hepatitis, we did not find any clustering, and this indicates that their cancers might have a very different cellular origin."

Through the analysis, researchers were also able to identify changes in mutations that are associated with more aggressive biliary-type liver cancers. Specifically, they found that mutations of KRASand IDHs, which are linked to more aggressive cancers, were less common in the cancers in patients with chronic hepatitis.

Looking to the future, Nakagawa adds, "Through our analysis, we were able to identify some liver cancers with biliary phenotype that are closer to liver cancer, and others that are similar to bile duct cancer. We hope that this will in the future allow us to create therapies tailored for each type. We also hope that the new mutations we discovered could be used as targets for future therapeutics."

This work was done as part of the International Cancer Genome Consortium (ICGC) project, which seeks obtain a comprehensive description of genomic, transcriptomic and epigenomic changes in more than 50 different tumor types and/or subtypes which are of clinical and societal importance across the globe. RIKEN is responsible for a project to study liver cancer associated with virus infection. 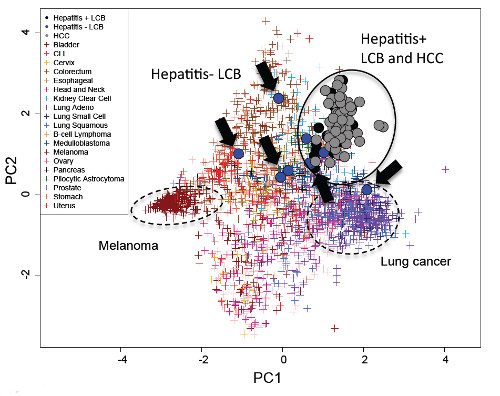 Clustering of cases in liver-related cancers