Just a touch of skyrmions

Ancient memory devices such as handwriting were based on mechanical energy—but in the modern world they have given way to devices based generally on electrical manipulation.

Today, scientists from the RIKEN Center for Emergent Matter Science may be about to wind back time. In a study published in Nature Communications, they have found a way to manipulate skyrmions—tiny nanometer-sized magnetic vortices found at the surface of magnetic materials—using mechanical energy.

Skyrmions have been widely touted as providing the basis for new high-density memory devices because of their small size and relative stability. However, it has proven difficult to create, delete, and move them, and skyrmion-based devices are not yet competitive with other high-tech devices based on spin.

According to Yoichi Nii of the Emergent Device Research Team, the first author of the study, "We began from the simple question of whether it would be practical to turn skyrmions on and off with mechanical force, and wondered how much force would be required. We imagined it would be substantial."

The group set out to work using a specially designed stress probe that could apply mechanical stress to the surface of manganese-silicide, a "chiral magnetic" that is known to host skyrmions, cooled to very low temperature. They found, to their surprise, that the force to create and destroy skyrmions was quite low, less than ten nanonewtons per skyrmion, which is comparable to the pressure exerted by the tip of a conventional pencil when we write in a notebook. A force applied perpendicular to the magnetic field led to the creation of skyrmions, while one parallel to the field turned the skyrmions off, making it possible to turn them on and off mechanically.

“This means,” says Yoshihiro Iwasa, leader of the Emergent Device Research Team, “that we may be able to fabricate devices in which skyrmions are created and deleted by a small mechanical force. This could be an inexpensive and low-energy-consuming way to create new low-cost memory devices and open the road to skymionics.”

One drawback of the current work is that it does require cooling the magnet to very low temperatures for the system to work. According to Nii, they plan to continue experiments with a variety of materials to try to identify ones that can host skyrmions that can be manipulated mechanically but at higher temperatures.

The work was done in collaboration with the University of Tokyo, the Japan Proton Accelerator Research Complex (J-PARC), and the Comprehensive Research Organization for Science and Society (CROSS). 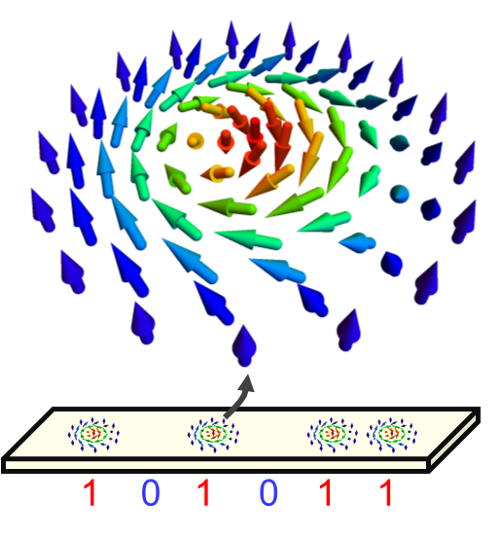 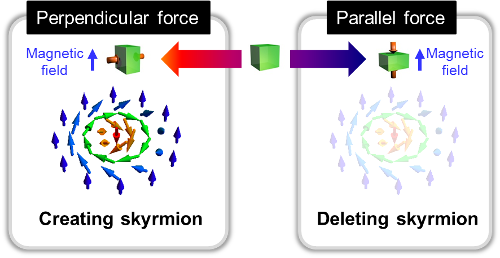