Scientists from the RIKEN Center for Emergent Matter Science (CEMS) and the University of Tokyo have developed a film that curls up and straightens out autonomously when exposed to tiny, barely measurable changes in ambient humidity. When irradiated with ultraviolet light, which causes changes in the film’s ability to absorb and desorb water, it can even “jump” into the air.

According to Daigo Miyajima of CEMS, “Our study began from a serendipitous finding. When we placed a compound called guanidinium carbonate into a high-temperature oven, we found that it formed not only a powdery substance—as is usual in similar processes—but also a yellowish film that stuck to the surface of the substrate. The film was a carbon nitrite polymer composed of stacked polymers of heptazine oriented parallel to the surface of the substrate.”

The surprise came when the team began to analyze this unusual film. They were able to remove it from the substrate by soaking it in warm water, and found that it was extremely light despite its toughness. What they couldn’t explain at first was that at ambient conditions, the material would suddenly bend and then straighten out again, without any obvious external stimulus.

The group did a number of experiments to determine why this was happening, and found that the key was tiny, essentially undetectable changes in the ambient humidity. They found, for instance, that moving a drop of water into the vicinity of the film would cause it to straighten, but that this did not happen when they ensured that there was no air motion within the box. They weighed the film when it was stretched out and curled up, and found a tiny decrease—of just 680 nanograms per 10 square millimeters—in the curled up configuration. They concluded that it was desorbing water on one surface and that the bonds between the water molecules and the polymer created mechanical stress which changed the shape. The change happened extremely rapidly—taking just 50 milliseconds when the film was exposed to ultraviolet light.

The motion was also powerful. When the film was placed on a flat surface and made to curl up, it could literally jump to a height of one centimeter, a height 10,000 times the thickness of the film. It was also durable: in one experiment they irradiated the film repeatedly with ultraviolet light, it bent and straightened more than 10,000 times without any noticeable deterioration.

In a final experiment, the researchers covered one half of the film with thin gold, to stop the absorption and desorption of water, and then subjected it to repeated curling and straightening. The film could actually walk over a surface, dragging itself as the half of the film bent and relaxed.

According to Takuzo Aida, leader of the Emergent Soft Matter Function Research Group at CEMS and a professor at the University of Tokyo, “In the same way that a mechanical watch takes advantage of the natural movements of the wrist to gain energy, this film takes tiny fluctuations in the ambient humidity and transforms them into mechanical energy. This type of device will be useful for creating a sustainable society.”

The research was published on July 18 in Nature Materials. 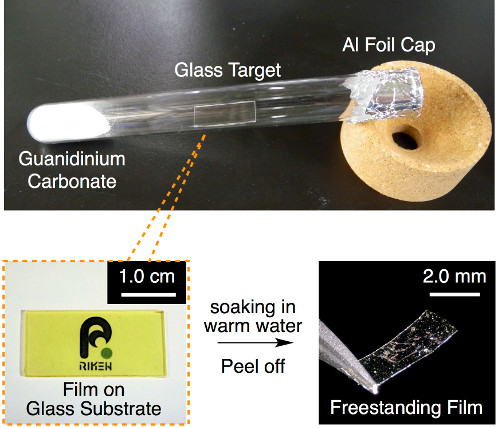 First clip (0:00-0:06) Jumping of a film actuator under light irradiation recorded by a high-speed camera. The film actuator bends into the upper side under light irradiation. The film was placed on a substrate in such a way that its upper side was oriented downward. When it was irradiated with light, a high-speed camera captured its jumping motion.

Second clip (0:07-1:21) Unidirectional walking of a partially protected CNP film in the presence of a proximal water droplet. Due to this partial protection against water adsorption, only its non-protected part responded to local humidity changes. Consequently, the actuator film walked unidirectionally.

Third clip (1:22-3:48) Behavior of the actuator film under ambient conditions and in a closed box. The film actuator slightly bent and straightened under ambient conditions because of ambient humidity fluctuations. After putting water droplet close to the film, it showed the accelerated motions. On the other hand, when the convection flow of air was completely stopped in a closed box, continuous bending and straightening were stopped in a flattened shape.