Energy jumps back and forth between molecules during transfers

The process of photosynthesis, through which plants convert sunlight into chemical energy, involves a carefully choreographed transfer of energy from molecule to molecule. Exactly how the energy is moved is not fully understood, as it is extremely difficult to observe these transfers, which take place extremely rapidly and on a very small scale.

Now, in research published in Nature, scientists from the RIKEN Surface and Interface Science Laboratory in Japan have developed a powerful observational method—absorption/emission spectroscopy combined with a scanning tunneling microscope (STM) —to catch these transfers in action.

In the past, scientists have attempted to map out how molecules become excited and pass on these excitations to other molecules. However, the method previously used, optical spectroscopy—which uses regular light waves—cannot see phenomena smaller than several hundred nanometers, and thus cannot detect much of the transfers, which take place at the nanometer level.

In the hope of seeing how these transfers take effect, the RIKEN group resolved to use the newly developed method to catch the transfers in action. To do the experiment, the researchers chose two molecules—free-base phthalocyanine (H2Pc) and magnesium phthalocyanine (MgPc)—which emit fluorescent light at different energies. They precisely stimulated the MgPc molecule alone with electrons from the STM tip and looked for the resulting emissions. When they did this, they detected luminescence signals from a nearby H2Pc molecule, clearly indicating an energy transfer from MgPc to H2Pc.

Through this work, the team showed that the mechanism behind the energy transfer is resonance energy transfer (RET)—a form of transfer where the energy is transmitted by resonance, in the same way that tuning forks will begin to vibrate together when they are tuned to the same frequency—rather than a charge transfer from one molecule to another through shared electrons. Moreover, in an unexpected finding, they observed a back-and-forth transfer, where the energy was first transferred from the second singlet state of H2Pc to the first singlet state of MgPc and finally funneled to the first singlet state of H2Pc.

This work is important for understanding how energy is transferred in processes such as photosynthesis. But the researchers also demonstrated the possibility of using a single-molecule valve device for energy transfer based on a transition between different chemical forms—known as tautomers—of H2Pc, which could be seen as the energy transfer switched on and off like a blinking light.

According to Yousoo Kim, who led the team, “Using this technique, we have shown that it is possible to pinpoint how energy is transferred between molecules. This work could be used to design new energy-harvesting devices such as photovoltaic cells, which also rely on energy transfers.”

He continues, “Our insights into energy transfers not only deepen our understanding of how energy is converted at the nanoscale level, but also opens a path to creating excitonic circuits with molecular architectures on solid surfaces.” 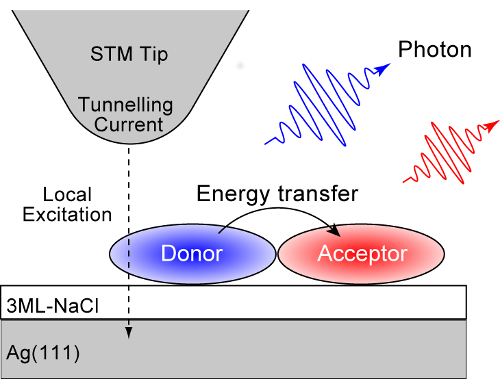 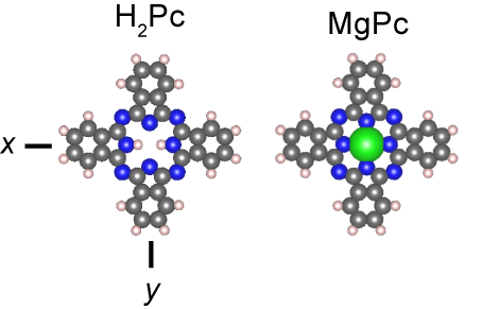 The x axis of H2Pc is parallel to the N–H H–N bond. 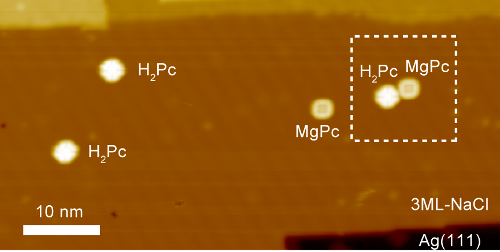