In living color: seeing cells from outside the body with synthetic bioluminescence

Glowing creatures like fireflies and jellyfish are captivating to look at but also a boon for science, as their bioluminescent molecules contribute to visualizing a host of biological processes. Now, scientists in Japan have supercharged these molecules, making them hundreds of times brighter in deep tissues and allowing for imaging of cells from outside the body. The bioengineered light source was used to track cancer cells in mice and brain-cell activity in monkeys, but its applications extend beyond the lab.

Bioluminescence is the result of a partnership: an enzyme-in this case luciferase derived from fireflies-catalyzes the substrate D-luciferin, creating a green-yellow glow in the process. There has been considerable research to make this process more efficient. For example, swapping out luciferin for synthetic analogs and improving the rate of catalysis. Atsushi Miyawaki and colleagues sought to go further, refining both ingredients to create AkaBLI, a completely bioengineered bioluminescence system for in vivo use. The collaboration with the University of Electro-Communications, Tokyo Institute of Technology and Kyoto University was led by Miyawaki of the RIKEN Brain Science Institute and published on February 23 in Science.

Based on previous work, the researchers knew that a synthetic luciferin called AkaLumine-HCl is able to penetrate the blood-brain barrier and produce a reddish light that is more easily seen in body tissues. It was not very compatible with the natural luciferase, however, so they successively mutated the enzyme to improve pairing with AkaLumine-HCl. The resulting Akaluc protein is both a more efficient catalyst for the substrate and more abundantly expressed by cells. In the mouse brain, this combination of Akaluc catalyzing AkaLumine-HCl, dubbed AkaBLI, resulted in a bioluminescence signal 1000 times stronger than that from the natural luciferase-luciferin reaction. Elsewhere in the body, just one or two glowing cells were clearly visible from within the mouse lung, something that could be useful for monitoring transplanted cells.

Bioluminescence can be introduced easily and voluntarily by including AkaBLI in animals' drinking water, which gives the most persistent glow, although injecting the molecules yielded greater intensity. "The fundamental improvement, though, is the practical applicability for in vivo physiological studies," says Miyawaki. With AkaBLI, how brain activity and structures change with behavior can be directly observed over time. In an experiment in which mice were exposed to familiar and new cage environments, the same neurons in the hippocampus could be recorded over multiple days. "This is the first time such a small ensemble of a few dozen deep neurons related to a specific learning behavior can be visualized non-invasively," says Miyawaki. And in a marmoset monkey, the researchers were able to track deep-brain neurons for more than a year using AkaBLI. The potential for this kind of stable and long-lasting bioluminescence for understanding neural circuitry during natural behaviors, observes Miyawaki, is intense. 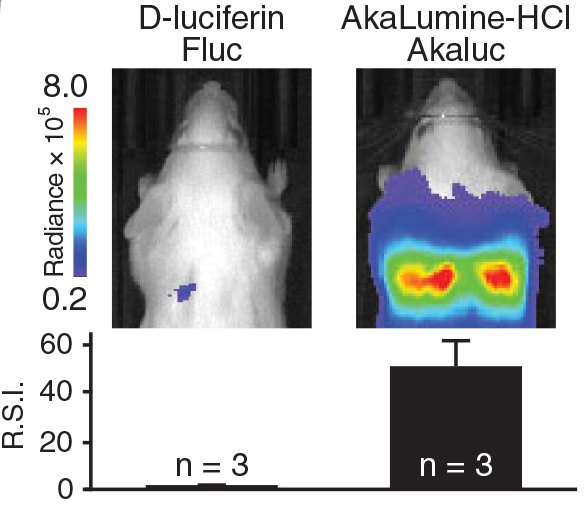 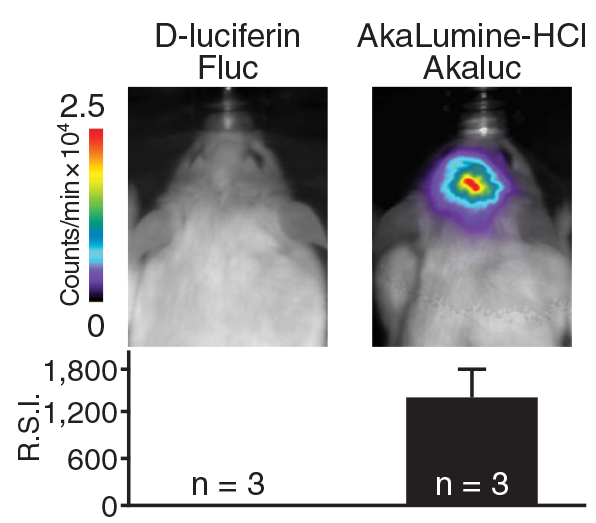 In vivo performance after 2 weeks

An example of bioluminescence imaging of Akaluc expression in the striatum of two freely moving rats.