Evolution of the inner ear: insights from jawless fish

Researchers at the RIKEN Center for Biosystems Dynamics (BDR) and collaborators have described for the first time the development of the hagfish inner ear. Published in the journal Nature, the study provides a new story for inner ear evolution that began with the last common ancestor of modern vertebrates.

Comparing organs among related animals can be helpful when trying to understand the evolutionary process, and will ultimately help us better understand organogenesis—the process through which organs develop. This underlying philosophy helped guide the collaborative effort to study the inner ear led by Shigeru Kuratani at RIKEN BDR.

The story begins with a difference between jawed and jawless vertebrates. Jawed vertebrates like humans have inner ears with three semicircular canals, which are what allow us to sense our position and stay balanced in the world, and especially to sense 3-D acceleration. The fossil record shows that a group of jawless fish from the Paleozoic era only had two semicircular canals. In order to understand the evolutionary changes that led three canals, the team looked at the only two types of jawless vertebrates that still exist on earth: lampreys and hagfish.

Lampreys are thought to have two semicircular canals, while hagfish only have one. However, hagfish are no longer thought to be more primitive than lampreys. A series of molecular biological experiments was able to clarify the issue. Analyzing the regulatory genes that control the development of the semicircular canals showed that the basic pattern of inner ear development is similar for all vertebrates, including lampreys and hagfish. Key genes, such as Tbx1 and Patched were expressed at the same places with the same timing across all three types of vertebrate.

Further analysis focused on the Otx1 gene. This gene is required for proper development of the lateral canal, the third canal that is unique to jawed vertebrates. The researchers found that despite the lack of a lateral canal, lampreys and hagfish both expressed Otx1 in the proper location during development. This was somewhat surprising as its expression was thought to be an advent that led to the evolution of the lateral canal. Instead, it appears that Otx1 expression in the otic vesicle is an ancient feature for all vertebrates.

A more complete understanding will be possible by performing studies with an animal that represents the lineages before jawed and jawless vertebrates diverged.

(a) jawed vertebrate (zebrafish),(b-c) jawless fish (lamprey and hagfish). Note three semicircular canals (asc, psc, and lsc) in jawed vertebrates, two in lampreys (lasc, lpsc), and one in hagfish (sc). This study shows that the single canal in hagfish is not a primitive trait, and that evolution did not proceed as an increase in semicircular canals from one to three. 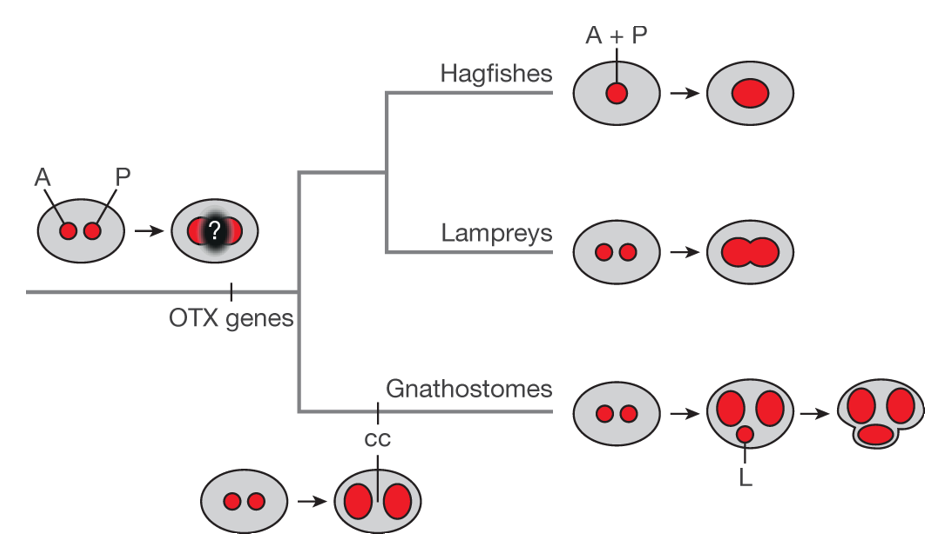