A friendlier way to deal with nitrate pollution

Learning from nature, scientists from the Center for Sustainable Resource Science in Japan and the Korean Basic Science Institute (KBSI) have found a catalyst that efficiently transforms nitrate into nitrite—an environmentally important reaction—without requiring high temperature or acidity, and now have identified the mechanism that makes this efficiency possible.

Nitrogen is an important element for various biological processes, but it is often necessary to convert it into one form or another, in a system known as the nitrogen cycle. In nature, this is usually carried out by bacteria and other microorganisms, which can perform the feat at ambient temperature and mild pH conditions. Recently, the excessive use of nitrogen fertilizers in response to population growth has led to serious water pollution due to the presence of nitrate (NO3-) ions in fertilizers. Runoff from agriculture can lead to nitrate pollution of drinking water, and the eutrophication of lakes and marshes, leading to algae growth. As a result, it has become necessary to reduce the emission of nitrate ions into the environment.

Wastewater cleaning using microbes is currently performed, but it is not always possible to do this, as the concentration of nitrate can make it impossible for microorganisms to survive. There have been attempts to create catalysts that can perform the same task done by bacteria. Unfortunately, due to the high stability of nitrate, these expensive rare metal catalysts require high temperature, ultraviolet photolysis, or strongly acidic environments. Thus the development of catalysts that could cheaply perform the transformation at ambient temperatures was a major goal of research.

Recently, an international team led by Ryuhei Nakamura of the RIKEN Center for Sustainable Resource Science (CSRS), decided to try to use the same method as nitrate reductase, an enzyme used by microorganisms, and succeeded in chemically synthesizing oxo-containing molybdenum sulfide, which was able to catalyze nitrate into nitrite in an aqueous electrolyte at neutral pH.

Now, in research published in Angewandte Chemie International Edition, they have used a variety of methods to determine that their catalyst contains a reaction active site similar to what is found in natural nitrate reductase. They had identified oxo-containing molybdenum sulfide as a promising candidate, and knew that it worked better than other catalysts, but they did not know why. They went on to study it by observing chemical species on its surface in the presence of a reducing agent—in this case dithionite ions—using molecular spectroscopy (electron paramagnetic resonance spectroscopy (EPR) and Raman spectroscopy. “We hypothesized,” says first author Yamei Li, who did the work at RIKEN CSRS and is currently at the Tokyo Institute of Technology, “that the oxo-molybdenum sulfide catalysts may have active sites similar to those in enzymes. To test this hypothesis, we attempted to track how chemical species on the catalyst surface change using molecular spectroscopy.”

Their main finding was that pentavalent molybdenum with oxygen ligands—one of the intermediate products—functioned as an active species that accelerated the reaction, and showed that this active species has a structure similar to the active core of natural nitrate reductase. Their studies using EPR spectroscopy confirmed this, finding that the oxygen and sulfur, ligands of the molybdenum also play an important role in efficiently producing the pentavalent oxo-molybdenum species on the catalyst surface.

According to Nakamura, “This result shows that nitrate ions can be detoxified in a mild environment without depending on rare metal catalysts. We hope that this will make possible the development of new technology for synthesizing ammonia from waste liquid.”

The results of this research have made a contribution to Goal 7: “Affordable and clean energy” and Goal 14: “Life below water” of the Sustainable Development Goals (SDGs) set by the United Nations. 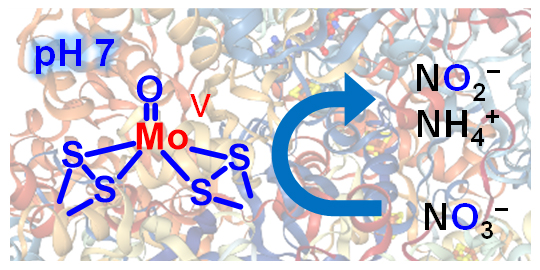 The catalist efficiently converts nitrate (bottom right) to other compounds 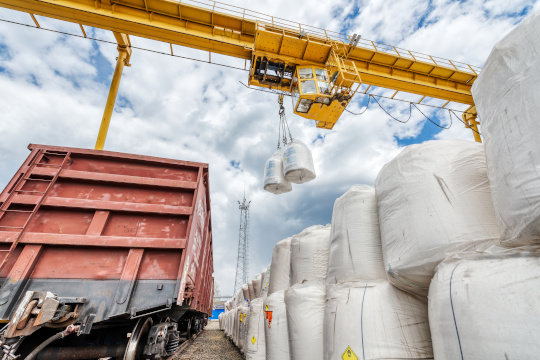