Zhengzheng Shi and colleagues at the RIKEN Center for Integrative Medical Sciences (IMS) in Japan report the effects of a common herbal remedy on colitis, one of two conditions that comprise inflammatory bowel disease (IBD). Published in Frontiers in Immunology, the study shows that DKT—a standard formula containing ginger, pepper, ginseng, and maltose—reduced the severity of colitis in lab mice by preventing the characteristic imbalance in gut microbes and by increasing levels of immune cells in the colon that fight inflammation.

Colitis is a chronic inflammation of the colon, characterized by an imbalance in gut bacteria and an abnormal immune response. Prevalence has doubled over the last 20 years, and it’s currently a global health concern, particularly in Europe and North America. Although treatments are numerous, they are only partially effective. This has led some researchers to take a closer look at traditional herbal medicines that originated in China, and are now commonly used in Japan and other Asian countries.

Daikenchuto (DKT) is a formula containing specific amounts of ginger, pepper, ginseng, and maltose, and is one of 148 herbal medicines called Kampo, which have been developed in Japan and are often prescribed by doctors to treat a variety of illnesses. Previous research has hinted that DKT might be useful for treating colitis, but evidence, particularly at the molecular level, has been lacking. Thus, Shi and the team of researchers at RIKEN IMS led by Naoko Satoh-Takayama conducted a detailed examination of its effects on a mouse model of colitis.

Colitis was induced in mice using dextran sodium sulfate, which is toxic to the cells that line the colon. When these mice were given DKT, their body weights remained normal, and they had lower clinical scores for colitis. Additional analysis revealed much less damage to the cells lining the colon. Having thus shown that DKT does indeed help protect against colitis, the researchers proceeded to analyze the gut microbiome of the mice and expression levels of anti-inflammatory immune cells.

Gut microbiomes contain numerous bacteria and fungi that aid in digestion and help the immune system. Colitis is associated with an imbalance in these gut microbiota, and analysis showed that a family of lactic acid bacteria were depleted in the colitic mice of this study. Also depleted was one of their metabolites, a short-chain fatty acid called propionate. Treating the model mice with DKT restored much of these missing bacteria—particularly those from the genus Lactobacillus—and levels of propionate were normal.

Colitis is also associated with an abnormal immune response that causes the characteristic intestinal inflammation. When the team looked at innate intestinal immune cells, they found that levels of a type called ILC3 were lower in the untreated colitic mice than in the DKT-treated colonic mice, and that mice engineered to lack ILC3 suffered more and could not benefit from DKT treatment. This means that ILC3s are critical for protecting against colitis and that DKT works by interacting with them. Lastly, qPCR analysis indicated that these important immune cells had receptors for propionate, called GPR43, on their surface.

“Daikenchuto is commonly prescribed to prevent and treat gastrointestinal diseases, as well as for reducing intestinal obstruction after colorectal cancer surgery,” says Satoh-Takayama. “Here we have shown that it can also alleviate intestinal diseases like colitis by rebalancing Lactobacillus levels in the gut microbiome. This likely helps reduce inflammatory immune responses by promoting the activity of type 3 innate lymphoid cells.” 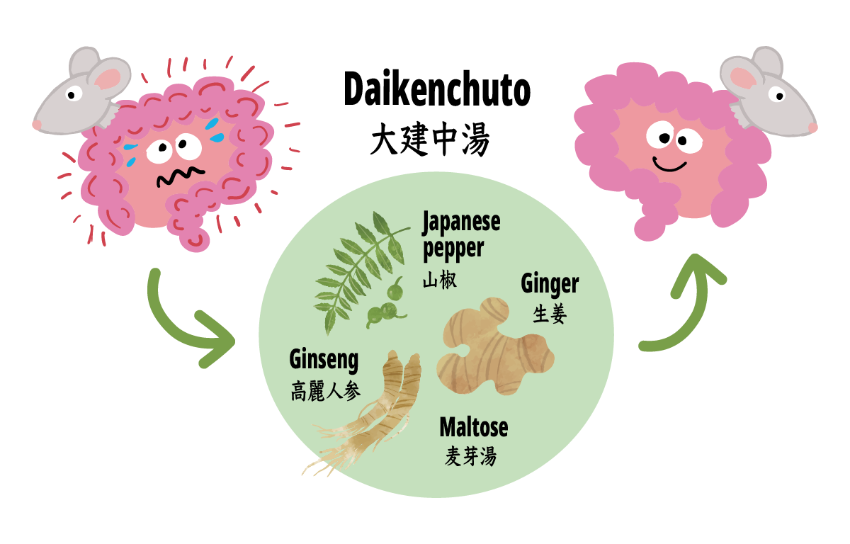 The condition of mice with colitis improved after treatment with daikenchuto, a medicine made from ginger, ginseng, and Japanese pepper. Analysis showed that tit works because it prevents the loss of key bacteria in the gut and facilitates the activity of innate immune cells in the gut called ILC3s.