The limit on the radii of neutron stars tightened 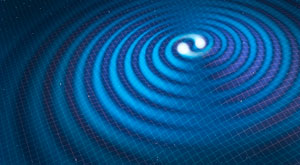 By using data collected by gravitational-wave detectors, a RIKEN researcher and his collaborators have established a new lower limit for the radius of a neutron star, a vital parameter for understanding these intriguing astronomical bodies1.

Neutron stars are the carcasses of stars that have collapsed under their own gravity. Typically, they are roughly 1.4 times more massive than the Sun, but a mere 20 kilometers in diameter. They are thus incredibly dense: one teaspoon of neutron-star material would weigh roughly 10 million tons.

“Neutron stars have insane densities,” says Oliver Just of the RIKEN Astrophysical Big Bang Laboratory. “Only the nuclei inside atoms have similar densities on Earth.”

Just adds that there is still a lot we do not know about neutron stars. The microphysics of a neutron star—which is composed mainly of neutrons that are also found in atomic nuclei—is “still a mystery,” he comments.

The group devised a way to place a tighter and more robust lower limit on the radius based on so-called multi-messenger astronomy, in which astronomers detect gravitational waves while simultaneously observing electromagnetic waves in the form of radio, visible and x-ray light.

On 17 August 2017, gravitational waves from a neutron-star merger were observed for the first time by Advanced LIGO and Advanced Virgo gravitational-wave detectors. Equally exciting, astronomers also measured the light emitted by this event.

The gravitational-wave signal revealed the masses of the two merging neutron stars, while the light signal suggested that the merged neutron stars did not immediately collapse to form a black hole, implying that the neutron-star material had a sufficiently large pressure to withstand collapse. From this, the scientists could infer that a typical neutron star must have a radius greater than about 10.7 kilometers, which nicely complements the finding by other researchers based on the same merger event that the radius cannot exceed 13.5 kilometers.

The method can be applied to future observations and will help further tighten the constraints on the neutron star radius. “As more gravitational wave detectors and light telescopes go online around the world, this will allow more accurate measurements and observations of neutron radii,” says Just. “It’s a very exciting time to be working in the field.”