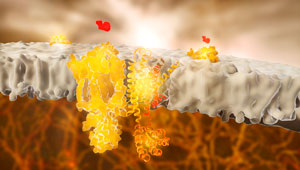 Figure 1: A new inhibitor-receptor compound has been found that can put certain G protein-coupled receptors (GPCRs, depicted in yellow) into an inactive state, opening up a host of drug opportunities. GPCRs span the surface of cells and relay important extracellular messages to cells. © RAMON ANDRADE 3DCIENCIA/SCIENCE PHOTO LIBRARY

G protein-coupled receptors (GPCRs) are cellular signaling proteins that control some of the most important biological functions in the body, ranging from hormone secretion to blood clotting. Accordingly, many of them are drug targets: between 30 and 50 per cent of medicines work by modifying the behavior of one of over 800 GPCRs. Researchers led by Shigeyuki Yokoyama at the RIKEN Structural Biology Laboratory have now identified a new mechanism for switching GPCRs off, which could lead to the development of a plethora of new drugs1.

The proteins the researchers are studying are lodged in the membranes of cells, with additional domains jutting into the cellular exterior and interior. Recently, GPCRs were found to be maintained in an inactive state in the presence of individual sodium ions. The ions block activation agents by tethering together a cluster of water molecules within the membrane-spanning portion of the receptor.

Yokoyama speculated that other chemical inhibitors may act as similar ‘off-switches’. He and his colleagues have confirmed this hypothesis with a structural analysis of a complex made of the leukotriene B4 receptor (BLT1), which plays a role in various inflammatory disorders, and a chemical inhibitor known as BIIL260. They chose the BIIL260 inhibitor as it was reported to exhibit a high affinity to the BLT1 receptor, which is important for effective crystallographic analysis, explains Yokoyama. When the researchers analyzed the receptor−inhibitor complex, they learned that the inhibitor had indeed locked the GPCRs in an inactive state, essentially taking the same place as the sodium ion and water molecule complex within the membrane-spanning segment of the receptor.

The BLT1 receptor is normally activated by a compound called leukotriene B4 (LTB4), but was shown to be inactivated when the new complex was present. “It was beyond our wildest imaginings to find that this structure mimicked the sodium ion and water molecule complex and even functions more strongly than the complex,” Yokoyama says. He was also taken aback because the inhibitor was found to bind to the receptor via a structure known as a benzamidine group, which has dramatically different chemical properties to the water and sodium ion complex that triggered the research.

The receptor they studied shares structural similarities with many other GPCRs, and so Yokoyama’s team is now trying to identify additional inhibitors that act in the same way. “Other benzamidine derivatives may also negatively modulate the activity of GPCRs,” he explains. “There are about 300 promising GPCRs drug targets, and we would like to find the most effective derivative for each of them.”