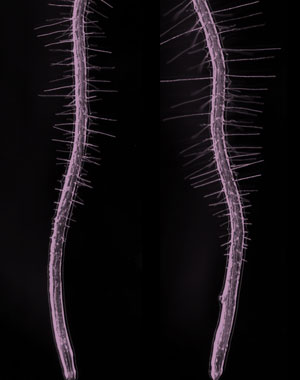 The interplay between three genes determines the size of key cells in plant roots, RIKEN scientists have discovered1. This finding may help researchers develop plants that can cope with droughts and nutrient-poor soils, and perhaps even boost crop yields.

How plants determine the final size of growing cells is an important unanswered question in plant development. Keiko Sugimoto’s team at the RIKEN Center for Sustainable Resource Science is trying to find clues to this question by looking at the fine hairs on roots, since they consistently grow to the same size under similar environmental conditions. These hairs are crucial for the uptake of water and nutrients by the roots.

Scientists know that the gene RSL4 promotes root hair growth, but, until now, they did not know the genes responsible for putting the brakes on hair growth. Sugimoto’s team suspected that GTL1 might play a role, since it has been found to limit the growth of plant leaf hairs known as trichomes. However, since plants lacking GTL1 have normal root hairs, other factors must be involved too.

The team thought the missing factor might be DF1, the most closely related gene to GTL1. “Both genes are highly expressed in roots, and the single mutants have a phenotype in trichomes but not in roots,” explains Michitaro Shibata, the study’s lead author.

When the researchers knocked out both genes together, the plants developed much longer root hairs (Fig. 1). These root hairs did not grow faster than normal, but rather they continued growing when they should have stopped. 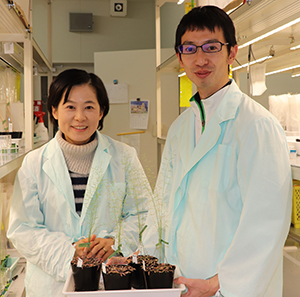 Keiko Sugimoto (left) and Michitaro Shibata (right) have found a genetic network that fine-tunes the growth of plant root hairs, which are crucial for water and nutrient uptake. © 2018 RIKEN

The team discovered that the gene RSL4 was more strongly expressed in the double mutant. This implies that GTL1 and DF1 normally repress RSL4 to stop root growth.

The researchers then compared the lists of genes regulated by RSL4, GTL1 and DF1 and found that they overlapped, with GTL1 and DF1 repressing a subset of RSL4 targets. RSL4 and GTL1 also regulate each other in a feedback loop, which stabilizes their expression to ensure consistent root hair size.

“The pathways overlapped more than I expected—that was a big surprise,” says Sugimoto. “Of course, that also makes the regulatory network robust, so it makes sense looking back.”

With these findings, the researchers have assembled the core network that fine-tunes the size of root hairs. They now aim to discover how environmental factors affect these genes and whether they can be used to breed stress-tolerant plants.

“Now that we have the tools to grow plants without root hairs, with lots of hairs, or with longer hairs, we can go and ask these kinds of questions,” comments Sugimoto.