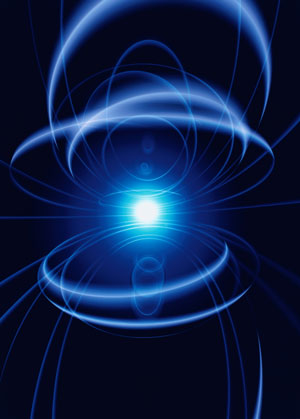 Understanding the quantum behavior of electrons is of profound interest to researchers because it could both pave the way for the low-energy, super-fast computers of tomorrow and explain fundamental physical phenomena. Now, RIKEN researchers have used a high-quality material to better come to grips with the quantum transport of electrons in magnetic semiconductors1.

Besides their electrical charge, electrons have another inherent property that is just as important—their spin. While all electrons have the same charge, their spin can take one of two values. This is often visualized as either an intrinsic clockwise or counter-clockwise rotation, or an up or a down arrow.

This property could be useful for information processing in an emerging computing technology known as spintronics. But spintronics is still in its infancy, and scientists are seeking to develop a better understanding of spin-related transport of electrons in materials.

In the conventional Hall effect, an electron moving through a conductor follows a curved trajectory when a magnetic field is applied at right angles to its motion. In ferromagnetic materials, the electron spins are aligned, and this effect becomes even more pronounced.

To investigate when and how this additional anomalous Hall effect happens, Takahashi and the team explored the effect on thin films of the magnetic semiconductor europium titanate (EuTiO3) at low temperatures. The beauty of using this material as a test bed for the anomalous Hall effect is that the electronic properties of EuTiO3 can be altered just by adding small amounts of lanthanum. “EuTiO3 is a special spin-polarized semiconductor because the density of charge carriers can be tuned while keeping the magnetization constant,” explains Takahashi.

Crucial to their success was the ability to create high-quality films of EuTiO3 using a technique called metal-organic molecular beam epitaxy. Material quality is important because defects in crystalline structure can scatter the electrons, which masks the additional anomalous Hall effect.

The scientists investigated EuTiO3 at charge densities that meant the material was in or near to the so-called Weyl state. Curiously, they discovered that the anomalous Hall effect does not increase linearly with the magnetization as previously thought.

“We hope to develop this idea further by controlling the anomalous Hall effect electrically using an electric gate and enhancing the effect by confining the electrons to two dimensions,” says Takahashi.