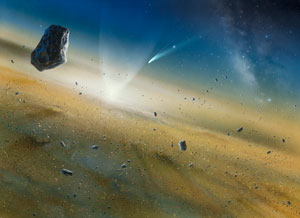 Figure 1: An artist’s impression of a protoplanetary disk, in which planets are believed to form through collisions of dust particles. © DETLEV VAN RAVENSWAAY/SCIENCE PHOTO LIBRARY

The size and distribution of dust grains in a protoplanetary disk have been pinned down by RIKEN researchers1. This information promises to be valuable for helping astrophysicists understand how these tiny seeds grow into mighty planets.

A protoplanetary disk is a disk of dust and gas swirling around a young star. Such disks can act as nurseries for new planets, but this process is shrouded in mystery.

“Planet formation can be thought of as dust grains growing from 100 nanometers to around 1,000 kilometers in size—a 10 trillion times increase,” explains Satoshi Ohashi of the Star and Planet Formation Laboratory. “But to understand how dust grains become larger, we need to know how big they are in protoplanetary disks.”

Ohashi’s team used the Atacama Large Millimeter/submillimeter Array (ALMA), a group of radio telescopes in Chile, to study radio waves from dust grains in the disk around a star. Some of these radio waves are polarized, which means that their electric fields tend to rise and fall in the same plane, rather than being randomly oriented. This polarization gives astronomers clues about the nature of grains in different parts of the disk.

The researchers used simulations to work out how different types of dust grains could be creating this unusual effect. They concluded that dust grains in the southern region of the disk are more likely to line up with the protoplanetary disk’s magnetic field, suggesting that the grains are less than 100 micrometers in size. “The alignment process would be more efficient in smaller dust grains,” says Ohashi.

But the polarization flip in the northern region of the disk suggests that some dust grains are scattering radio waves from other grains and are less influenced by the protoplanetary disk’s magnetic field. This implies the grains are probably about 150 micrometers across.

“We found that the origin of the polarization depends on the grain sizes,” says Ohashi.

The observations also hint that dust grains could already be growing larger in the northern region of the protoplanetary disk. “This may be the first step of planet formation,” Ohashi adds.

The team now hopes to find similar evidence of grain growth by observing other protoplanetary disks, which would help to investigate the process of grain growth and the role of magnetic fields in planet formation.