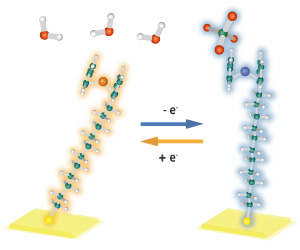 A new analytical technique developed by researchers at RIKEN could see self-assembled electrochemically active materials deployed in applications such as biosensors, molecular electronics and energy-storage devices. They used photoelectron spectroscopy to detect changes in the electroactive materials under different electrochemical conditions1. New insights generated by the technique should spark significant progress toward real-world applications for these promising materials.

Researchers often create self-assembled electroactive structures by exploiting the strong chemical bond that forms between sulfur atoms and gold. Coating an electrode with gold and submerging it in a solution of molecules with a sulfur group at one end creates a bristling forest of these molecules across the electrode as the sulfur atoms grab onto the gold surface.

Useful functionality can emerge if the other tip of the molecules on this self-assembled surface bears an electrochemically active substituent, such as ferrocene, which consists of an iron atom sandwiched between two five-membered carbon rings. By varying the applied electrical potential, the iron atoms will gain or shed electrons in a process known as redox, altering the surface’s chemical and physical properties.

The challenge has been observing that functionality in action, explains Raymond Wong of the RIKEN Surface and Interface Science Laboratory. “Conventional characterization typically employs electrochemical methods such as cyclic voltammetry. But that only tells you the material’s overall current response as a function of electrical potential,” explains Wong. “Our work is motivated by the desire to obtain complementary information on the electronic and structural details that accompany redox.”

Wong and his colleagues developed a way to probe those details using x-ray and ultraviolet photoelectron spectroscopy (XPS/UPS). They designed an experiment in which an electrochemical cell was coupled to an XPS/UPS chamber by a gate valve.

The researchers tested this setup using a ferrocene-tipped self-assembled monolayer as a model system. As the iron atoms switched between neutral ferrocene and the positively charged ferrocenium state, the team observed changes in the orientation of the molecules (Fig. 1), the thickness of the monolayer and the formation of ion pairs.

To perform the XPS/UPS analysis, the sample had to be transferred from the electrochemical solution to a vacuum chamber via the gate valve. The fact that the self-assembled monolayer retained its structure under vacuum opens up many new possibilities. “This means that we can potentially use other vacuum techniques, including scanning probe microscopy, for real-space observations of the local changes induced by electrochemical redox,” Wong predicts.