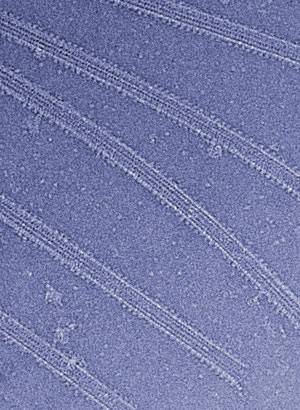 The molecular mechanism responsible for conveying proteins along the ‘trunk’ of neurons has been uncovered by RIKEN researchers1. This finding challenges conventional thinking about how the cellular transport system works.

Neurons contain a network of filamentous proteins called microtubules, which act as conveyor belts, relaying proteins, organelles and other cell components to their proper destinations. This transport occurs as a result of interactions between microtubule filaments and a superfamily of motor proteins called kinesins.

A neuron has a tree-like structure, with many branches, or dendrites, but just one trunk—the axon. Among the thousands of microtubules that run from the neuron body, less than a few per cent go to the axon. However, some kinesins transport their cargo just to the axon, and it had been unclear how they pick out just the few microtubules that go there.

“We wanted to discover how kinesin chooses the correct track,” says Yasushi Okada of the RIKEN Center for Biosystems Dynamics Research. “We had previously proposed that the microtubule itself acts as a road sign.” Okada and co-workers have now shown experimentally that their proposal is correct.

The researchers looked at how the road signs are organized in the cell and were surprised to find that when kinesin-1, a member of the kinesin superfamily, binds to a microtubule, the microtubule changes into a state that has a high affinity for kinesin-1. As a result, the microtubule recruits more kinesin-1 molecules. 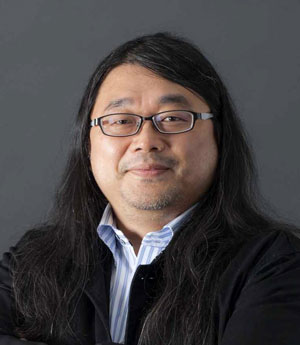 Yasushi Okada and his co-workers have found evidence for the molecular mechanism that ensures that proteins are conveyed along the axon of neurons. © 2018 RIKEN

Okada’s team, in collaboration with Nobutaka Hirokawa at the University of Tokyo, then explored the structural basis behind this mechanism and found that when kinesin binds to a microtubule, it initiates a domino effect. It rotates β-tubulin (one of the two subunits that make up microtubule filaments), which pushes its neigboring α-tubulin (the other subunit of microtubules), causing it to simultaneously twist and shift. This movement pushes the next β-tubulin, and so on. In this way, the binding of just a few kinesin molecules to a microtubule can trigger global changes in its shape.

“This mechanism is analogous to ant pheromones,” explains Okada. “Ants use pheromones to find the shortest path between their nest and food. As they walk, they place pheromones, which act as road signs to other ants, which use them to trace the same path. This is a well-known example of self-organization, and the kinesin–microtubule system uses the same principle.”

The team now plans to obtain further evidence for this self-organization model and to study further regulations of microtubule shape and kinesin-based movement.