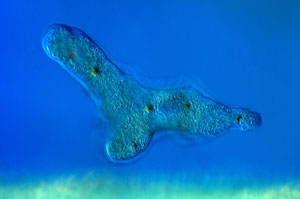 Two molecules that drive the motion of a wide range of cells inhibit each other, and so are not expressed in the same place on the cell membrane, a pair of RIKEN researchers has shown1. This mechanism explains why cells do not attempt to move in two directions at the same time.

A diverse range of cells, from amoebae, to cancer cells, to certain immune cells in your body, propel themselves by extending finger-like projections known as pseudopodia.

The formation of pseudopodia is regulated by two molecules on the cell membrane: phosphatidylinositol 3,4,5-trisphosphate (PIP3), which spawns pseudopodia, and PIP3 phosphatase (PTEN), which suppresses them. These two molecules never overlap. Various explanations for this have been proposed, but until now no-one has shown what prevents PIP3 and PTEN from encroaching on each other.

This piqued the curiosity of Satomi Matsuoka of the RIKEN Center for Biosystems Dynamics Research (BDR). “While observing cells using fluorescence microscopy, I wondered why the green signals from PIP3 and the red ones from PTEN on the cell membrane don’t merge and produce a yellow signal,” she recalls. “I thought it must mean that there is some kind of interaction between the two molecules.”

Now, Matsuoka and Masahiro Ueda, who is also at BDR, have manipulated the levels of PIP3 in single living cells of slime mold and demonstrated that PIP3 suppresses the local accumulation of the enzyme PTEN on the cell membrane and vice versa. 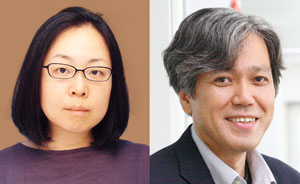 The two researchers first genetically modified slime mold cells so they had high levels of PIP3 on their membranes.

“Since PIP3 is a signaling molecule that can induce cancer, normal cells generally have extremely low levels of it on their membranes,” explains Matsuoka. “We made mutant cell lines that have high PIP3 levels without stimulation.” The scientists did not observe any red signal from PTEN on the membrane of these cells.

They then changed the PIP3 level reversibly by inhibiting an enzyme that produces PIP3 to reveal that the PTEN concentration immediately went up and down as the PIP3 concentration went down and up.

Based on these results and further experiments using single-molecule imaging, the pair concluded that PIP3 inhibits PTEN. And PTEN is a phosphatase against PIP3, whose catalytic reaction reduces PIP3. This mutual inhibition prevents multiple pseudopodia forming at one time.

Matsuoka expects the same mechanism operates in other nucleus-containing cells, including immune cells in humans.

She notes that the finding clears up a long-standing conundrum. “It’s a counter-intuitive result because many researchers assumed that enzymes like PTEN are enriched in places where the substrate is enriched,” Matsuoka comments.