The location of stem cells in the skin that help give mice their sense of touch has been pinpointed by a RIKEN-led team1. This discovery could lead to new treatments for people with sensory processing disorders.

The skin is home to many compartmentalized pools of different stem cells, each with its own properties, location and function. The particular stem cells that help regenerate the hair follicle epidermis are found in a ‘bulge’ about halfway up the outer sheath that surrounds the hair root. And within that bulge are different subregions, each with its own population of stem cells—one of which, it’s now known, produces an extracellular matrix (ECM) protein called EGFL6.

Hironobu Fujiwara, now at the RIKEN Center for Biosystems Dynamics Research, first became interested in this ECM protein while doing a postdoctoral fellowship in the United Kingdom. He found it was concentrated in the extracellular network around the upper part of the bulge. But it was unclear at the time where EGFL6 came from and what it did.

At his RIKEN lab, Fujiwara and his colleagues have now shown that EGFL6 is deposited by stem cells in the upper bulge region itself. Using electron microscopy, the researchers demonstrated that this protein wraps around mechanosensory units found at the hair follicle bulge. 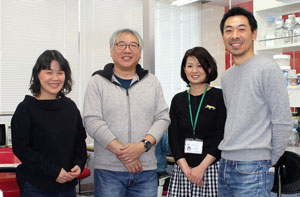 Fujiwara likens the role of the collar matrix to that of a cylinder in a car engine. Just as the cylinder supports the piston, so too the collar matrix is “very important for supporting the parallel nerve-ending structure of the lanceolate complexes,” he says. “EGFL6 helps detect small distortions between the nerve cell surface and the surrounding collar matrix that is generated by skin indentation or hair shaft vibration,” Fujiwara explains.

The next exciting challenge is to determine whether the collar matrix components function as a protein tether that transmit mechanical stimuli to axonal endings by linking them with their surroundings. “Many researchers have been searching for a protein tether for tactile sensation,” says Fujiwara. “The collar matrix has emerged as a major candidate for it.”

The finding could be good news for people suffering from itching and other sensory processing disorders. “Upper-bulge stem cells and the collar matrix may be key elements to restore the sense of touch or cure tactile sensory disorders and itching,” notes Fujiwara.