Simulations reveal the mechanics of early eye formation in a dish 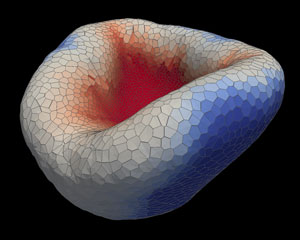 Figure 1: Computer simulations have revealed the mechanics behind optic cup indentation. Reprinted with permission of AAAS from Ref. 1. © The authors, some rights reserved; exclusive licensee American Association for the Advancement of Science.

A new computer model that simulates how tissues bend and move to form complex structures is helping RIKEN scientists grow retinas in a dish more reliably1. The method could one day help doctors repair damaged eyes in the clinic. More immediately, it offers a way for researchers to study retinal development and what goes wrong in optic disease.

Previously, Satoru Okuda, a biophysicist who co-led the study with Mototsugu Eiraku at the RIKEN Center for Biosystems Dynamics Research (both are now based at Kyoto University but maintain affiliations at RIKEN) and their RIKEN colleagues had shown that embryonic stem cells from both mice and humans could spontaneously fashion themselves into a primordial eye construct known as an optic cup (Fig. 1). In those initial experiments, they coaxed the stem cells to form retinal precursor cells. Over several days, those retinal cells then coalesced into a bubble-like ‘optic vesicle’ that folded in on itself, creating the optic cup with an outer layer of supporting cells and an inner layer of light-sensing retinal tissue.

However, it was unclear how exactly that complex biological structure took shape—and the researchers were left with a number of unanswered questions surrounding the role of mechanical forces in regulating three-dimensional (3D) tissue formation.

Initially, says Okuda, the team assumed that it was the wedging of tissue at the boundary between cells fated to become either a supporting layer or the retina itself that drove the indentation behind the characteristic horseshoe shape of the optic cup.

But when, in the current study, the researchers inputted their experimental data into a quantitative simulation model, they realized that the physics pointed to a different explanation. According to the simulations, the caving in of the early retina was directly responsible for the dimpling of the optic cup, and it was the strain of that invagination that provoked the constriction of cells at the tissue boundary. Specifically, cells at the boundary modulated the shape of the whole optic cup through mechanosensing.

The team tested the model’s predictions by experimentally applying mechanical forces at various stages of mouse stem cell–derived optic cup induction. Whether in a lab dish or on a computer screen, the cell shape changes they saw were the same—suggesting that this model-and-test strategy could help to improve the engineering of complex tissues for eventual applications in regenerative medicine.

“These findings highlight the usefulness of combining 3D modeling and culture systems,” says Okuda. “This approach not only contributes to our understanding of 3D morphogenesis, but also allows us to precisely control complex tissue structures derived from embryonic stem cells in culture.”