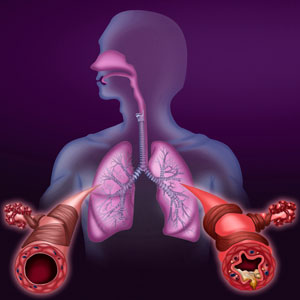 Attacks of allergies like asthma are sustained by a protein that keeps an immune cell active by modifying gene activity, RIKEN researchers have found1. Hence, targeting this protein could help to suppress allergic attacks.

A subset of immune cells known as innate lymphoid cells (ILCs), called ILC2s, reside in mucosal tissues such as those that line the stomach, windpipe and lungs, on the lookout for pathogens like parasites. A pathogen will spur ILC2s to produce signaling proteins known as cytokines. These, in turn, recruit white blood cells called eosinophils, which attack the parasites.

During an allergic reaction, ILC2s mistakenly identify a benign compound as a pathogen. Consequently, the allergen activates ILC2s, and this leads to the production of high levels of cytokines, enhancing the accumulation of eosinophils and causing inflammation and tissue damage.

Repeated stimulation of T cells—another type of immune cell—at chronic inflammation sites causes them to become exhausted, so that they lose their ability to produce cytokines and to proliferate. In contrast, ILC2s remain activated during repeated allergic inflammations. “ILC2s are known to be very tough immune cells,” comments Takashi Ebihara at the RIKEN Center for Integrative Medical Sciences. But it was unclear what makes these cells so resilient.

To discover the secret of ILC2s’ endurance, Ebihara and his colleagues investigated mice that had been genetically modified so that their ILCs lacked the protein Cbfβ, which forms a complex with a gene-modifying protein called Runx. Runx proteins are involved in many biological processes, including cell proliferation, differentiation and survival. They are also play a role in asthma-like diseases. 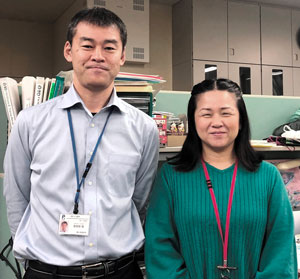 Takashi Ebihara (left) and Chizuko Miyamoto, with collaborators, have found that a transcription factor prevents an immune cell from becoming exhausted by repeated allergic reactions. © RIKEN 2019

When the team analysed the tissues of the genetically modified mice, they found that deleting Cbfβ depleted Runx functions in ILCs, which reduced the toughness of ILC2s. “Interestingly, our data suggests that the absence of Runx proteins in ILC2s attenuates acute exacerbation of chronic asthma,” says Ebihara.

The researchers found that a small population of activated ILC2s falls into a state of ‘exhausted-like’ hypo-responsiveness during severe allergic inflammation (Fig. 1). But Runx proteins prevented the formation of these exhausted-like ILC2s.

“If exhausted-like ILC2s help to attenuate disease severity, then the phenotypic conversion of ILC2s to exhausted-like hypo-responsiveness could be a good target of immune therapy,” Ebihara says.