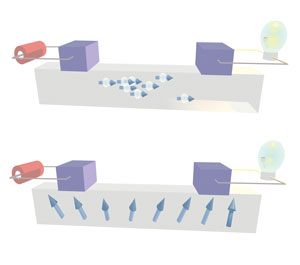 Figure 1: In the traditional way of viewing spin transport in materials, spins are thought to flow through a material as a spin current (top image). But in theoretical analysis by RIKEN researchers has shown that it is more physically meaningful to discuss spin fluctuations traveling through the material (bottom image). © 2019 RIKEN Center for Emergent Matter Science

It turns out that the concept of ‘spin fluctuations’ rather than ‘spin currents’ could offer a one-equation model for spintronics—a promising quantum alternative to electronics. Two RIKEN researchers have shown that focusing on quantum density fluctuations could be a vital shift in thinking for the field1.

Currently, it’s thought that spin currents—often imagined as a flow of electron spins analogous to the flow of an electron charge—could help to make devices that are faster and have a lower power consumption. A recent Google Scholar search for the term ‘spin current’ produced more than 34,000 hits.

But in a theoretical analysis, Gen Tatara and Christian Pauyac of the RIKEN Center for Emergent Matter Science have shown that focusing on spin density leads to a more physically meaningful picture of spintronics phenomena (Fig. 1).

If an electric voltage is applied to one end of a material, non-local energy transfer through magnetic materials can usually be correlated to spin currents, it has recently been discovered. But Tatara says this is most elegantly described by focussing on spin fluctuations, as what’s happening physically is that a ferromagnetic fluctuation (magnetic susceptibility) is creating a spin accumulation at the other end of the material.

While Tatara says this new way of analyzing spin transport in materials probably won’t result in new predictions, it will allow physicists to use a single equation to explain non-local energy transfer via spin, rather than multiple equations from different theories. It will also highlight the differences between spin and electric ‘currents’, including the fact that spin can be created or destroyed in a material.

But Tatara suspects spin currents will die hard, because of comparisons with conventional electric currents and the term’s widespread use. “Researchers will probably still talk about spin currents because they’re already an important concept to the community,” he explains.

Tatara first came up with his spin fluctuation concept while on a ski trip. “An experimentalist mentioned that he was really surprised to find out that spin currents can flow in antiferromagnet insulators,” Tatara recalls. Neighboring spins in an antiferromagnetic material point in opposite directions and so were not expected to allow a spin current to flow.

The two researchers hope to provide evidence to support their argument by performing neutron-scattering experiments in the near future.