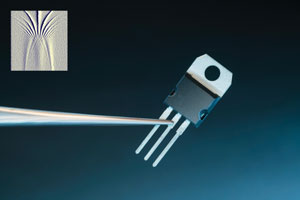 Many highly sensitive measurement techniques are based on monitoring the interference of waves. The most well-known example is the detection of extremely weak gravitational waves generated by colliding neutron stars and black holes using the interference between two laser beams that are several kilometers long. Many scientists are working on extending this technique to the wave functions of quantum objects since this would permit much more sensitive sensing than is possible using classical waves.

A promising system for achieving such quantum interferometry is silicon because researchers can draw on the many decades of research and development that have gone into conventional silicon-based electronics and integrated circuits. In particular, spin qubits in silicon could be used for quantum interferometry, but semiconductor qubits typically need temperatures very close to absolute zero, which necessitates using bulky and expensive cryogenic equipment.

Now, Keiji Ono of the RIKEN Advanced Device Laboratory and his co-workers have raised the operating temperature of qubits in silicon to 1.6 kelvin. “This is in the ‘high temperature’ range, which might sound strange, but compared with the 0.1 kelvin temperatures usually required for semiconductor qubits, these high temperatures can be produced in a less expensive, smaller facility and in a short time,” comments Ono. “This is a major achievement and will reduce the hurdles for any research group trying to enter this area of research and development.”

The researchers fabricated a simple three-terminal device similar to a general transistor using standard microfabrication techniques, and were able to observe the quantum interference effects of the single qubit while continuously varying the energy level of the qubit (inset of Fig. 1).

“I wanted to use a silicon device as a universal basis for exploring ubiquitous, material-independent quantum effects,” explains Ono. “Furthermore, our device is not just a laboratory device made using silicon material, but a practical device that actually forms part of a large-scale integrated circuit.”

The results that the team obtained using the device agreed well with theory. “Our single qubit calculates the weighted average of two input variables using quantum interference,” says Ono. “We achieved almost perfect agreement between the experiments and calculations, confirming the ubiquitous nature of the observed quantum interference effect.”