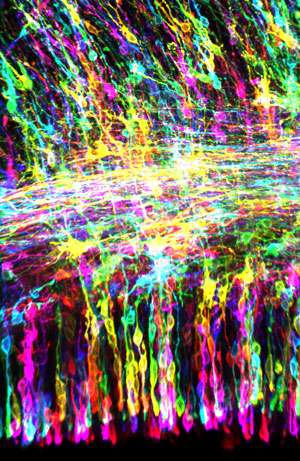 Neural stem cells affect the timing and trajectory of division in brain development more than previously thought, RIKEN researchers have found1. This discovery could have important implications for our understanding of the evolution of the mammalian brain.

“We’ve been interested in the general design principles underlying how brains are built,” says Fumio Matsuzaki of the RIKEN Center for Biosystems Dynamics Research.

Matsuzaki and his team have focused on brain stem cells known as radial glia (Fig. 1). These cells, which give rise to all the neurons in the cerebral cortex, are stretched between two surfaces, known as the apical and basal membranes.

Radial glia initially divide laterally in a symmetric fashion, yielding two daughter radial glia that are also anchored to both surfaces. Over time, some of these cells begin dividing asymmetrically, pushing at the basal surface and causing the developing brain to expand outward. These asymmetric divisions yield more-mature cells that ultimately produce neurons and other brain cells.

For decades, developmental biologists have postulated that this transition is governed by changes in the orientation of the cellular spindles—molecular machines that govern mitotic division—relative to the apical surface.

But previous work by Matsuzaki and his colleagues has called that model into question2,3. “Our findings have provided strong evidence that mitotic spindle orientation does not determine whether self-renewal or differentiation occurs,” he says.

The latest findings by Matsuzaki’s team not only reinforce this hypothesis, but also offer an alternative mechanism to account for this shift.

“This ability to regenerate prevents radial glia from detaching and migrating,” explains Matsuzaki. “Only later in development do these detachment events lead to expansion and differentiation.”

This is not just important for brain development; it also has evolutionary consequences since this process governs the expansion of cortical layers near the brain surface and complex folds seen in the brains of primates and other higher mammals.

Matsuzaki is now keen to understand the forces that control when and why radial glia ‘let go’ and begin to differentiate. “We don’t yet know the exact mechanisms by which one daughter cell self-renews while the other differentiates,” he says. “This is an enigma in our field.”