On-surface cycloaddition reactions watched every step of the way

By observing individual atoms as they rearrange themselves step by step, chemists at RIKEN have cast new light on the route by which halogenated aromatic molecules join together on a silver surface1. These insights promise to help engineers generate atomically precise nanomaterials and electronic devices.

Molecular electronics and solar cells are two examples of devices that could be made by combining aromatic organic molecules together into extended, π-conjugated structures that conduct electricity.

“A powerful way to directly construct new ring scaffolds with π-conjugated features is the reaction known as the on-surface dehalogenative cycloaddition reaction,” says Chi Zhang, a member of Yousoo Kim’s Surface and Interface Science Laboratory at RIKEN. “However, a lack of knowledge about the intermediate states that form during this reaction has hindered our ability to precisely design and optimize the reaction products.” 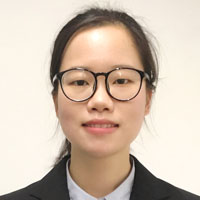 By gradually stepping up the temperature and observing the structural changes that occurred at each increment, the researchers were able to study the cycloaddition reaction step by step. They then interpreted the STM images with the help of density functional theory calculations of the structure of predicted reaction intermediates.

“The real-space visualization of the whole reaction processes—combined with further interpretations by theoretical calculations—finally clarified the stepwise metal-mediated reaction pathway, which has never been reported before,” Zhang says. “I think this mechanism can also be generalized to other on-surface syntheses.”

The team will next try other reaction excitation sources such as light to induce on-surface reactions and syntheses.