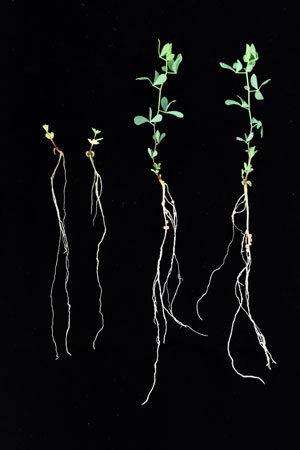 The formation of nitrogen-fixing nodules in the roots of legumes involves a gene that is usually active in the development of lateral roots, RIKEN plant biologists have found1. This discovery may one day make it possible to engineer crops that do not require nitrogen fertilizers.

Unlike most other plants, legumes such as peas and beans can capture nitrogen from the air by nodules in their roots that house nitrogen-fixing bacteria. This allows them to thrive in nitrogen-poor soils.

To investigate nodule formation, a team led by Makoto Hayashi of the RIKEN Center for Sustainable Resource Science began by identifying genes controlled by the gene NODULE INCEPTION (NIN ), an essential, early acting factor in nodule formation. They were looking for genes that encode transcription factors—proteins that regulate the expression of other genes.

The researchers overexpressed the transcription factor they had identified together with a known NIN target, NF-YA1. Only one of the genes, ASL18a, caused an increase in cell division when it was overexpressed with NF-YA1. ASL18 is known to be involved in the development of lateral roots, but this was the first evidence that it—or any other lateral root gene—plays a role in nodulation.

“I was very excited because I had an idea that the genes responsible for lateral root development are involved in nodule development,” says Hayashi. “It’s been a long-standing hypothesis in the field.” 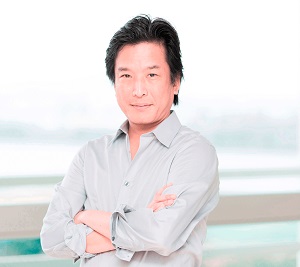 Makoto Hayashi and his team have shown that a gene involved in lateral root development also controls the formation of nitrogen-fixing root nodules. © 2020 RIKEN

The team next engineered plants lacking ASL18a to figure out what the gene does during nodulation. Nodule formation was unaffected by the change, suggesting that other genes act redundantly with ASL18a in controlling nodule growth. A clear difference emerged when both ASL18a and NF-YA1 were knocked out, and it became greater still when a third gene, NF-YB1, was also inactivated.

Hayashi’s team also showed that the ASL18a protein physically interacts with the two NF-Y subunit proteins, NF-YA1 and NF-YB1. Finally, they overexpressed ASL18a together with NF-YA1 and NF-YB1, and the resulting roots grew bumps, showing that the three genes act together to stimulate cell division.

These findings show that nodulation includes the activity of a lateral root development gene, supporting the notion that nodule organogenesis evolved by co-opting lateral root genes and deepening our understanding of how these organs evolved.

Hayashi hopes that piecing together the genetic pathways controlling nodulation will eventually make it possible to engineer crops that can fix nitrogen. “We currently have to provide nitrogen fertilizer to major crops, which produces greenhouse gases and causes eutrophication of water, among other problems,” he says. “If we could isolate the key genes needed for nodulation and transfer them into major crops, we could reduce the use of nitrogen fertilizers.”