Two-electron qubit points the way to scaling up quantum computers 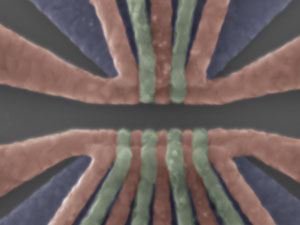 Figure 1: Scanning electron micrograph of the device that an all-RIKEN team used to create and test a qubit that uses the spins of two electrons. Reprinted, with permission, from Ref. 1. Copyright (2020) by the American Physical Society.

The high-accuracy, resonant operation in silicon of a new type of qubit—the basic unit of data in quantum computers—has been demonstrated for the first time by an all-RIKEN team1. This qubit overcomes a problem with conventional qubits in silicon, which has been a roadblock to scaling up quantum computers.

Quantum computers promise to revolutionize computing as they will be able to perform certain types of calculations much faster than conventional computers.

There are various competing technologies for realizing quantum computers, all with their advantages and disadvantages. One of the most promising is the use of electron spins in silicon. It has the huge head start of being able to apply the semiconductor manufacturing techniques used today for conventional electronics.

But in all these diverse technologies, quantum computers are based on qubits—the quantum equivalent of bits in conventional computers—and use them to store information and perform calculations.

In silicon-based quantum computers, the simplest qubit is the spin of a single electron, which can be in a superposition of two possible states: up and down. However, these qubits require high-frequency microwave pulses to control them, which are hard to focus down so that they only control one qubit without disrupting its neighbors.

Now, Seigo Tarucha, Kenta Takeda and three co-workers, all at the RIKEN Center for Emergent Matter Science, have realized high-accuracy operation using a qubit that employs the spins of two electrons, which can exist in the superposition of two states: up, down and down, up.

Compared to qubits based on single electrons, this qubit can be controlled by much lower frequency microwave pulses, which are easier to restrict to narrow areas. “The big advantage of our qubit is that it doesn’t require high-frequency control pulses, which are usually difficult to localize and can be a problem when scaling a system up,” explains Takeda. “The crosstalk caused by high-frequency signals can unintentionally rotate qubits near the target one.”

While these two-electron qubits have been realized in previous studies, this is the first time that the accuracy of the operation was 99.6%.

“Previous demonstrations of these qubits suffered from both nuclear and charge noises,” Takeda notes. “In this study, we used an improved device and operation scheme to mitigate the issues and show that the control fidelity of the qubit can exceed the 99% threshold for quantum error correction.”

The team now intends to make their device even more accurate by rendering the nuclear noise negligible through employing a special type of silicon that contains only one isotope.