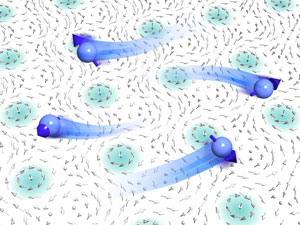 Figure 1: RIKEN physicists have created an array of skyrmions (green swirls) in a material that is both centrosymmetric and lacks geometrical frustration. The blue spheres are conduction electrons.© 2020 RIKEN Center for Emergent Matter Science

A restriction on the kind of materials that can host nanoscale magnetic whirlpools known as skyrmions has been lifted by experimentalists at RIKEN1. This will significantly expand the range of the materials skyrmions can be created in, making them even more attractive for use in low-power data-storage devices.

First discovered a little over a decade ago, skyrmions are highly promising for application in low-power, high-density storage and transfer of data. They are attracting increasing interest, and there are predictions that the first skyrmion-based commercial devices will start appearing in about ten years.

However, until recently, skyrmions had been observed only at interfaces and in a special class of materials whose crystal structures lacked a center of symmetry. Last year, a RIKEN-led team succeeded in creating them in a material that had a center of symmetry, increasing the range of materials that could host skyrmions. They were able to do this because their material possessed a property known as geometric frustration, where the geometry of a material prevents the system from adopting the lowest possible energy state at low temperatures.

Now, Shinichiro Seki and Nguyen Duy Khanh of the RIKEN Center for Emergent Matter Science and their co-workers have gone a step further and shown that skyrmions can be created even in centrosymmetric materials that lack geometric frustration. They created a square array of skyrmions that are less than 2 nanometers in diameter—the smallest skyrmions created to date in a single material—in the centrosymmetric tetragonal magnet GdRu2Si2. 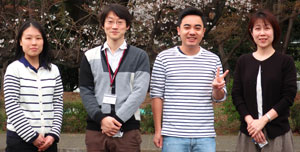 Shinichiro Seki (second from left), Nguyen Duy Khanh (second from right) and their co-workers have expanded the range of materials that can host skyrmions by creating them in a centrosymmetric tetragonal magnet that lacks geometric frustration.© 2020 RIKEN

Since geometric frustration kicks in only at very low temperatures, the finding that it is not needed for generating skyrmions raises the possibility that they could be formed at room temperature, which will be a huge boost for their use in applications. “We’re now looking for a new system that has a magnetic ordering temperature at close to room temperature or even above,” says Nguyen.

After a fortuitous encounter at a conference last year, the team has been collaborating with theorists at the University of Tokyo to uncover the mechanism that allows skyrmions to be created without geometric frustration. “We were very surprised to learn that they are working on the problem and that their theoretical results agree very well with our experimental results,” Nguyen notes.